Health behaviours, such as physical activity and eating a balanced diet have a huge impact on our health. These lifestyle choices can act as risk factors for a range of diseases such as diabetes, obesity, and coronary heart disease. Regular physical activity in children has a range of benefits, ranging from improved learning to better mental and physical health. For adults, physical activity can have a protective effect against many chronic conditions.

The COVID-19 pandemic meant that our population has spent more time in their homes, with reduced access to outdoor space due to government restrictions in place. People were relying on their local areas, any private outdoor space (gardens) and indoor space to exercise and be physically active in.

This chapter covers the following topics:

Moving and eating during the COVID-19 pandemic

Recovery homepage
Back to the top

Moving and eating during the COVID-19 pandemic

Public Health England and the UK Food Standards Agency carried out the National Diet and Nutrition Survey Rolling Programme (NDNS RP) between August and October 2020 to assess the impact of the pandemic on the diet and physical activity of people in the UK.  Looking at self-reported diet and physical activity, alongside dietary behaviours collected in a web questionnaire, the study gathered data from 1,000 participants. These participants previously took part in the NDNS RP, roughly 2 and a half years previously.

Some of the main findings of the study were:

The means for all groups had decreased when comparing these means to the data collected in the previous survey, roughly 2 and a half years prior to the pandemic - by 0.2, 0.7 and 0.4 portions respectively.

Cutting down on or skipping meals

When asked whether they or a member of their household had cut down on or skipped any meals since the start of the pandemic, 19% of participants reported that they had. Of that 19%, the main reason (72%) for doing so was that the food they wanted was not available in the grocery shops.

68% of those surveyed said that they visited the grocery shops less and nearly 60% said that they had cooked more at home since the start of the pandemic. 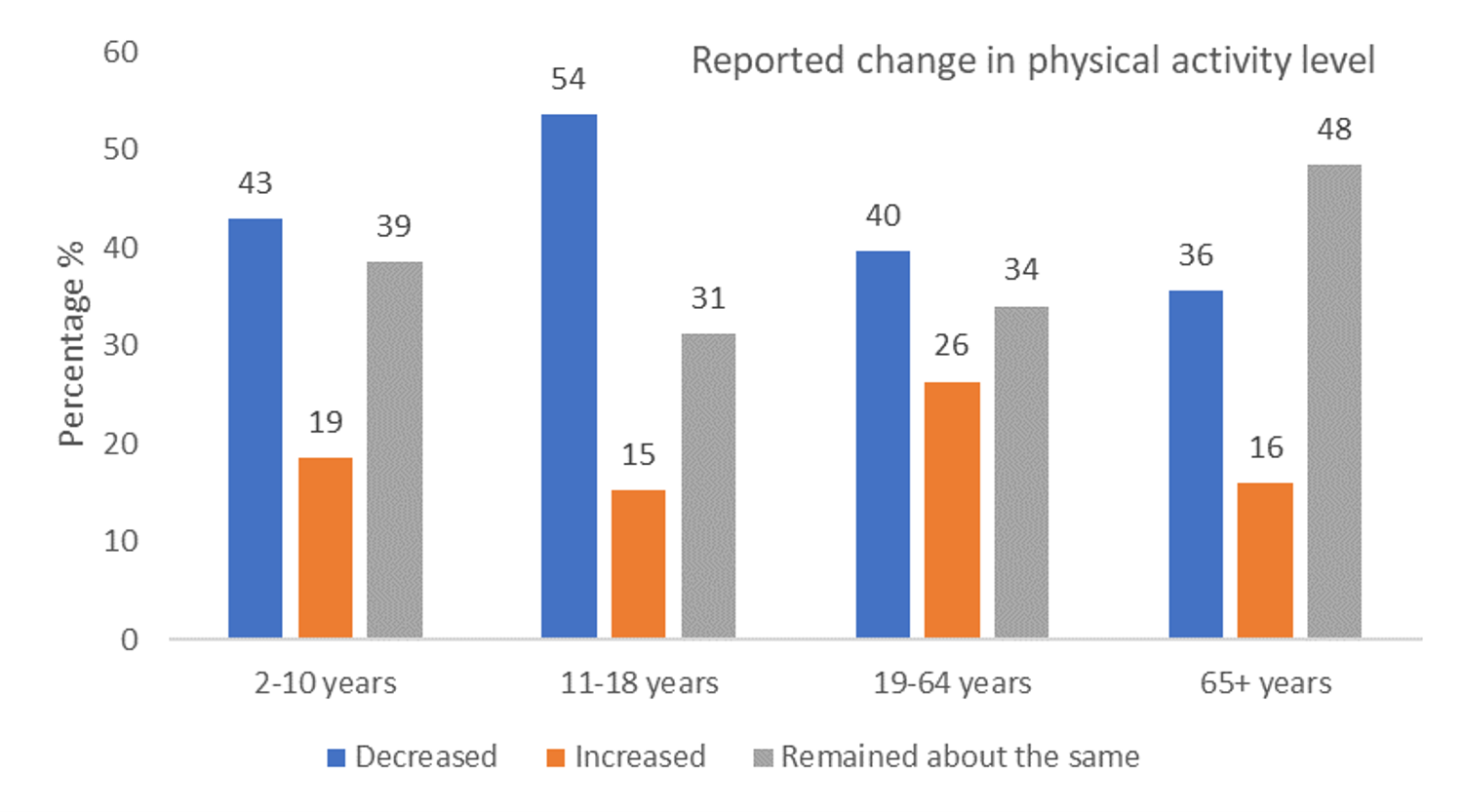 Excess weight and obesity can lead to various serious medical conditions, including:

- Some types of cancer

During the course of the COVID-19 pandemic, emerging evidence has been produced that suggests that those living with overweight or obesity are at much increased risk of serious complications and even death from COVID-19.

The findings that have come from numerous study types, carried out both in the UK and other countries, are widely in agreement on the relationship between weight and COVID-19 complexities.

The risks associated appear to increase progressively with an increasing BMI above the healthy weight range, even after adjusting for other potential impacting factors such as demographic.

There are various factors that can put a person at higher risk of serious complications from COVID-19, such as age and ethnicity, however excess weight may be one of the few risk factors that can be modified, with existing evidence of effecting interventions.

Percentage of adults (aged 18+) classified as overweight or obese 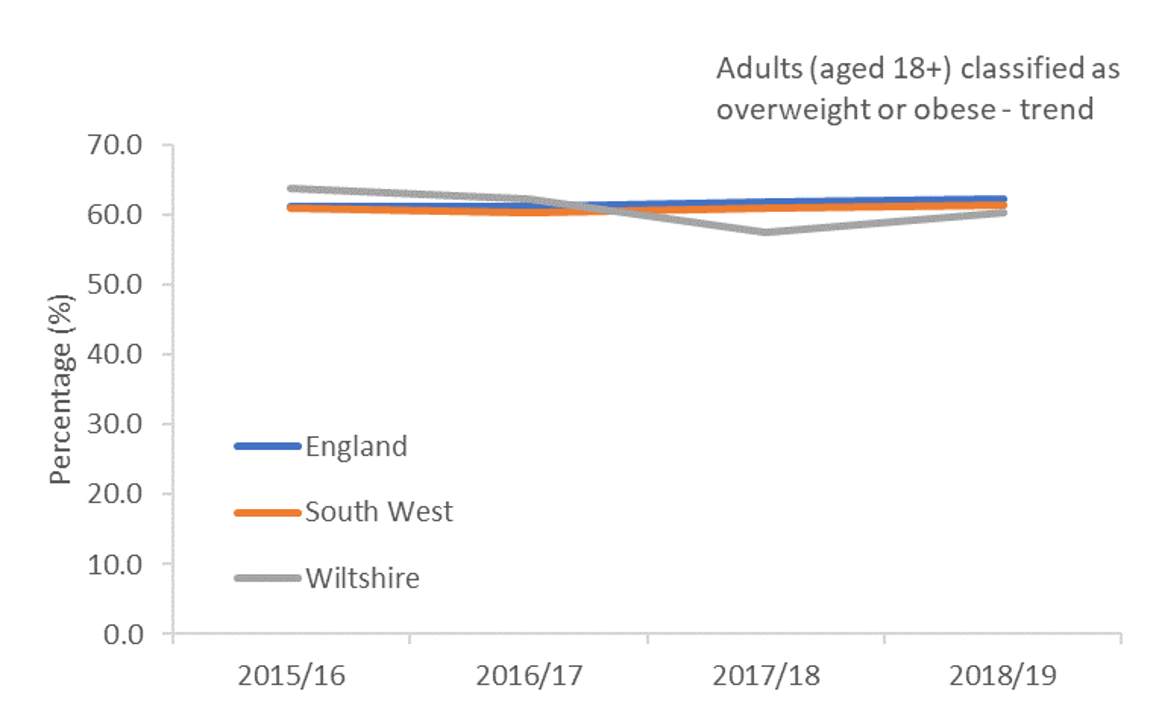 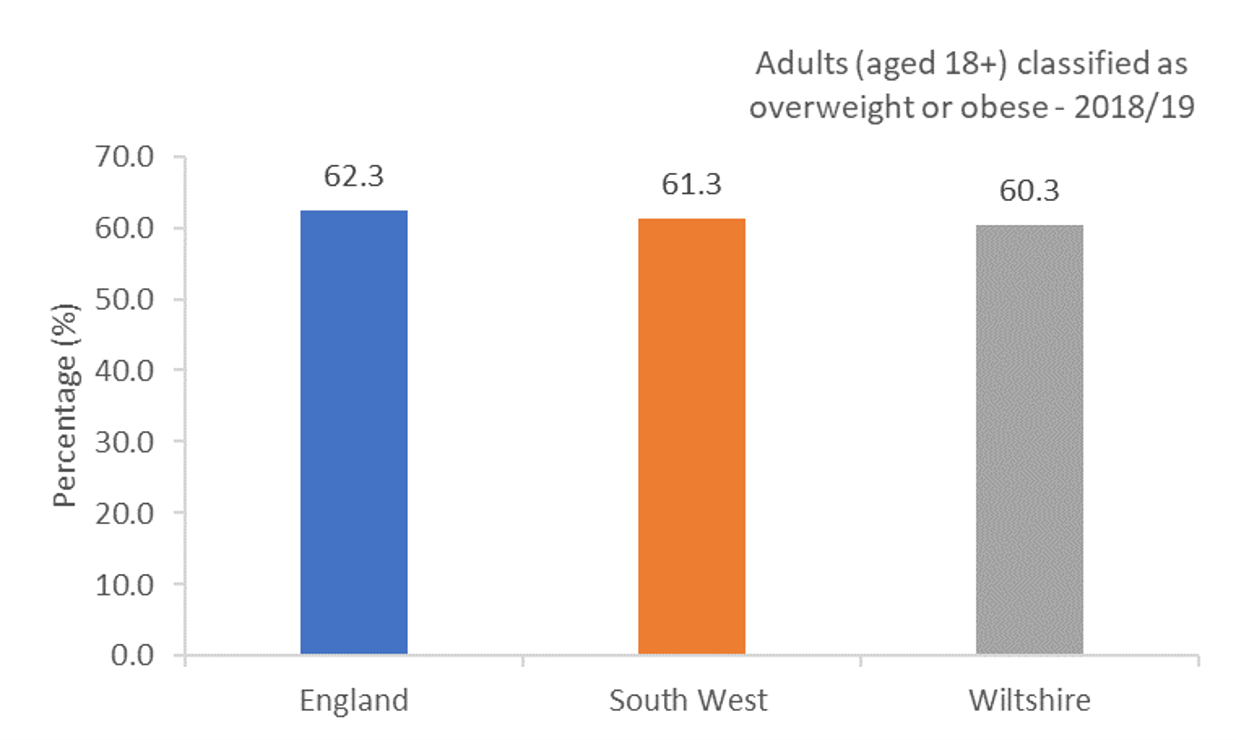 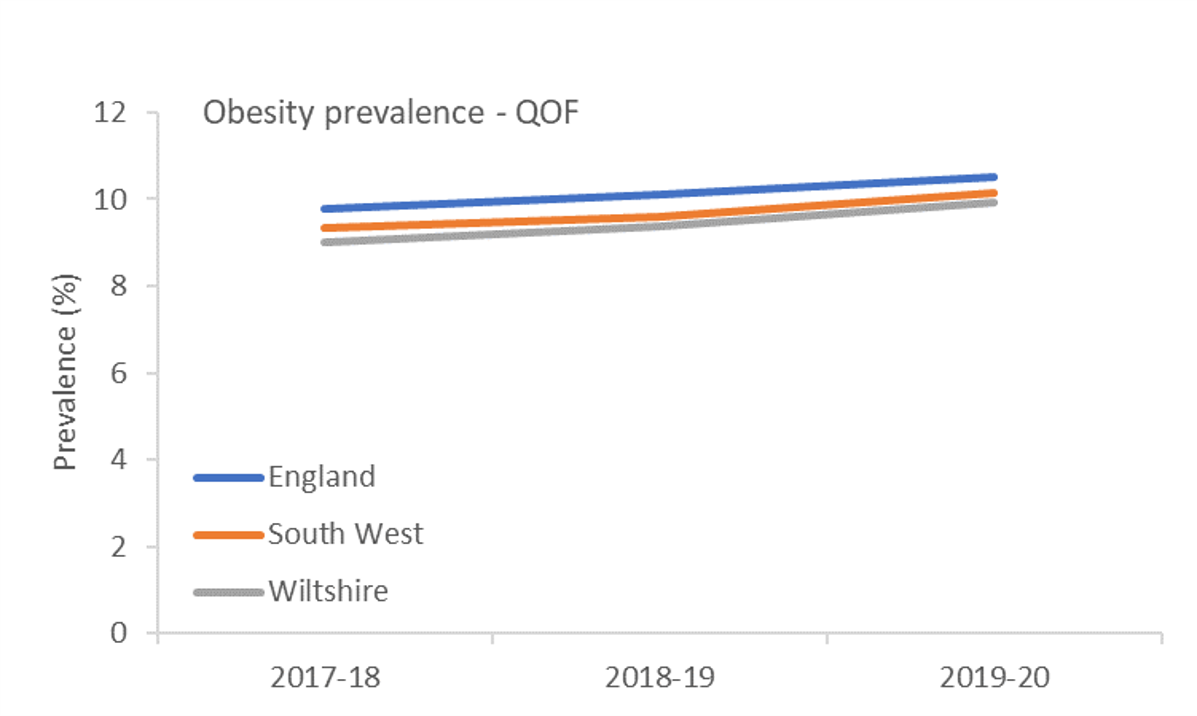 Nearly 10% of patients aged 18+ registered with GP surgeries in Wiltshire in 2019/20, were classed as obese. Although prevalence of obesity is slightly lower in Wiltshire in comparison to the South West and England, it has increased over the past three years. 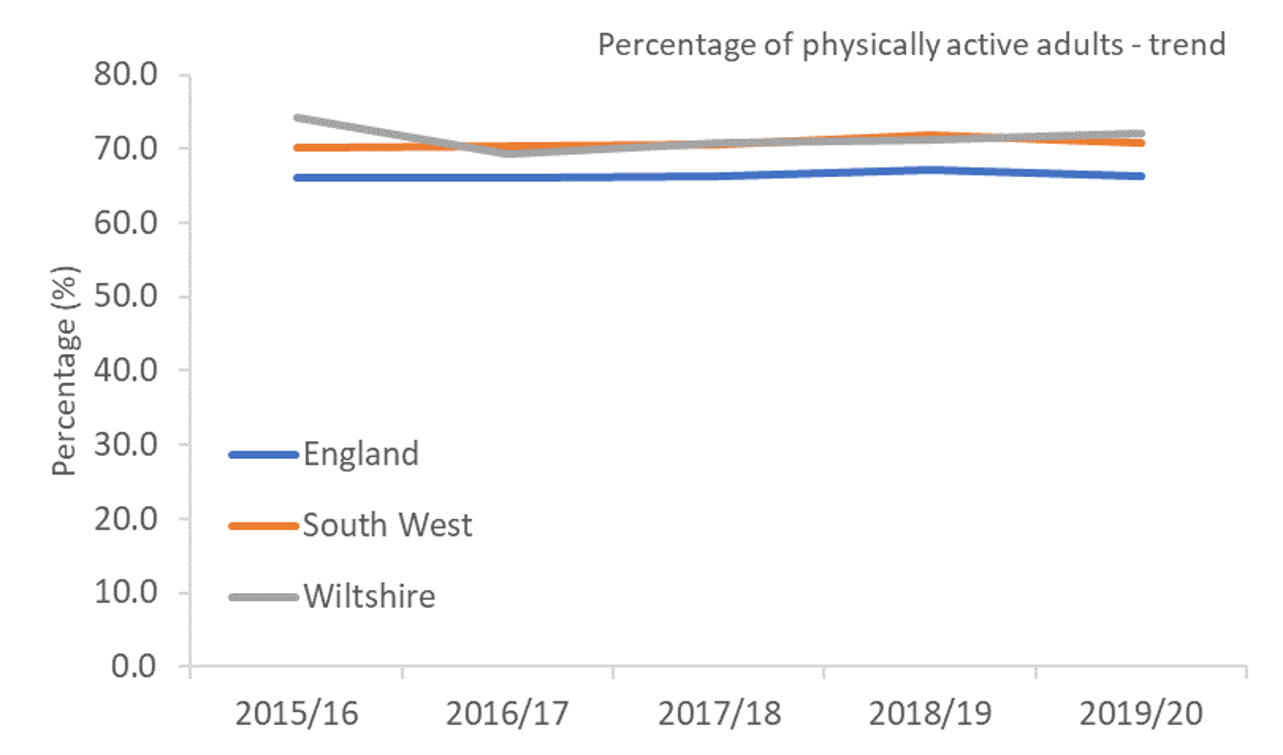 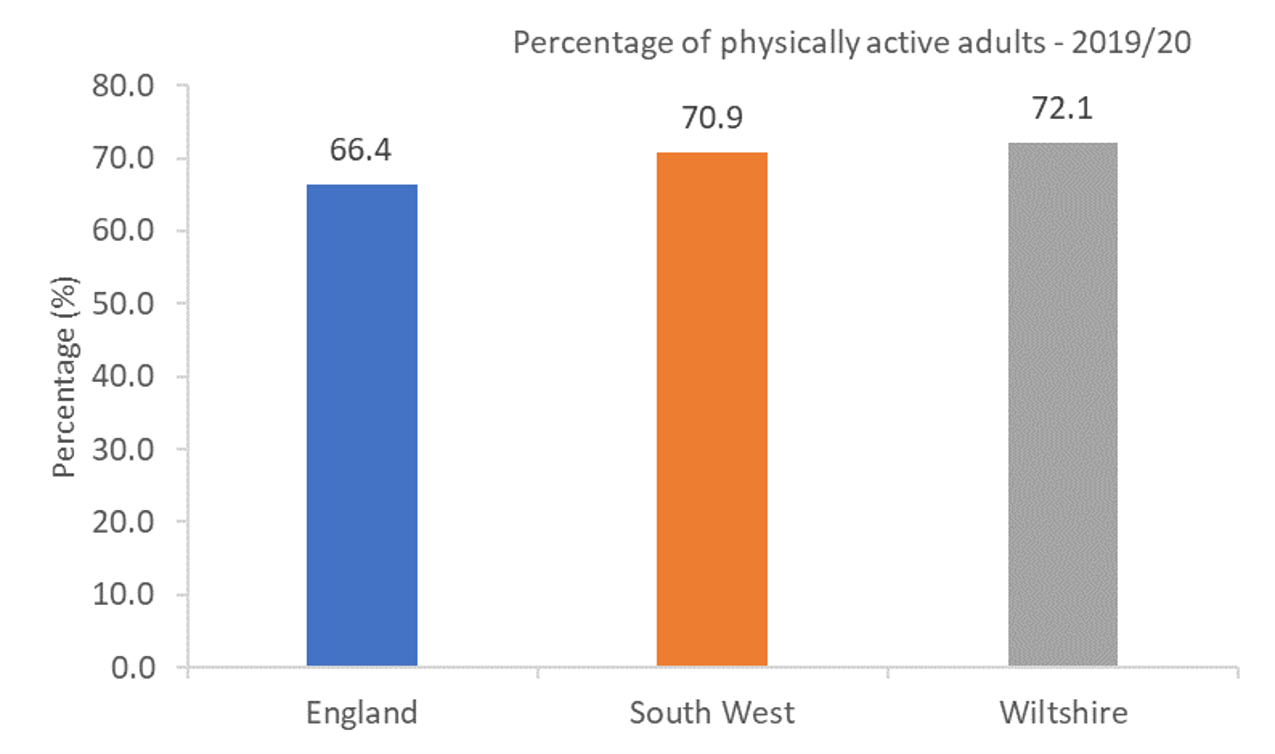 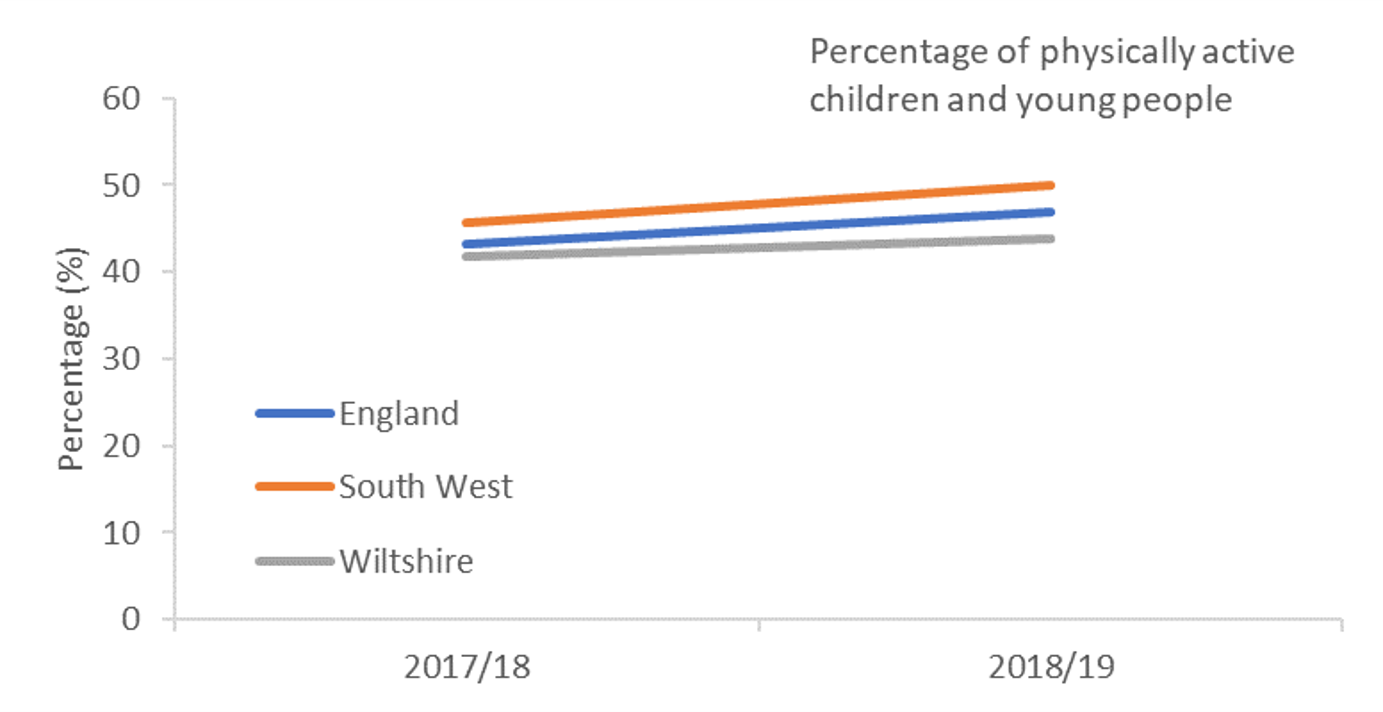 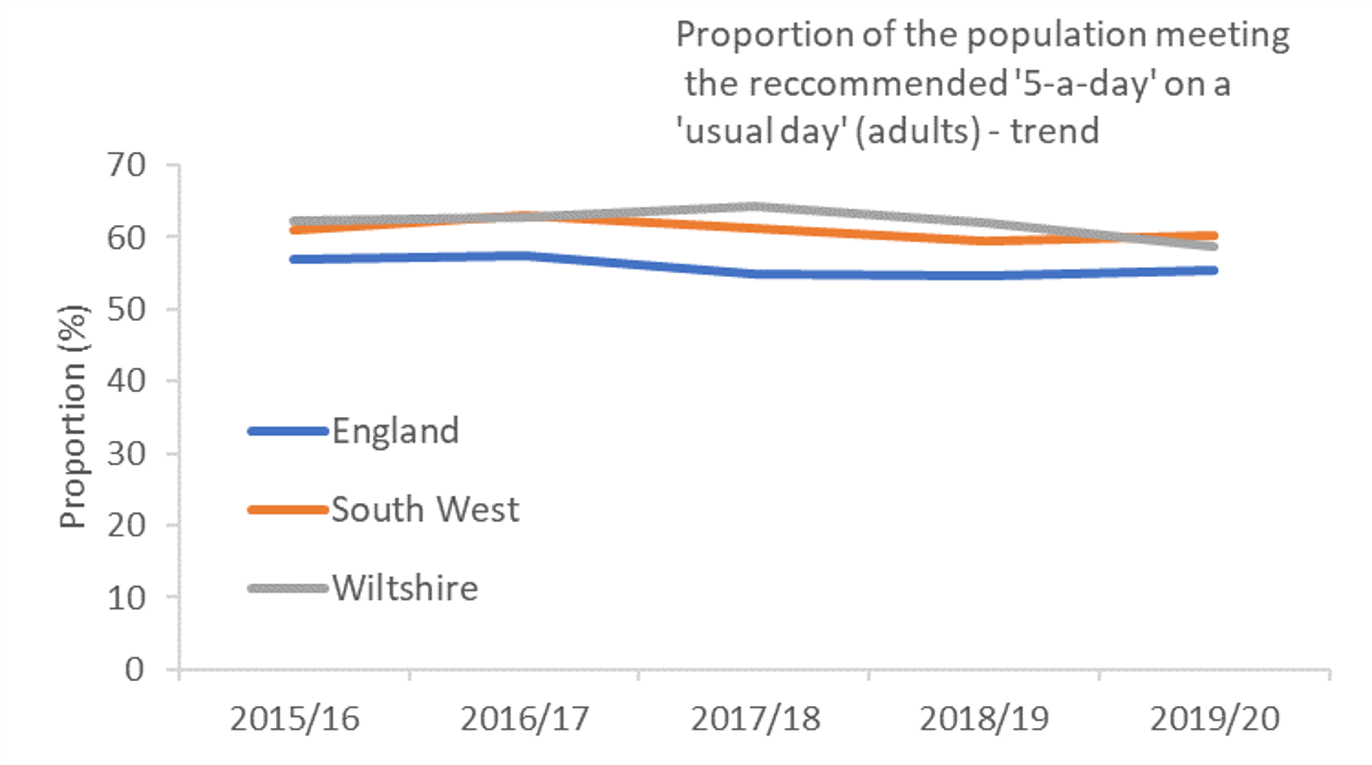 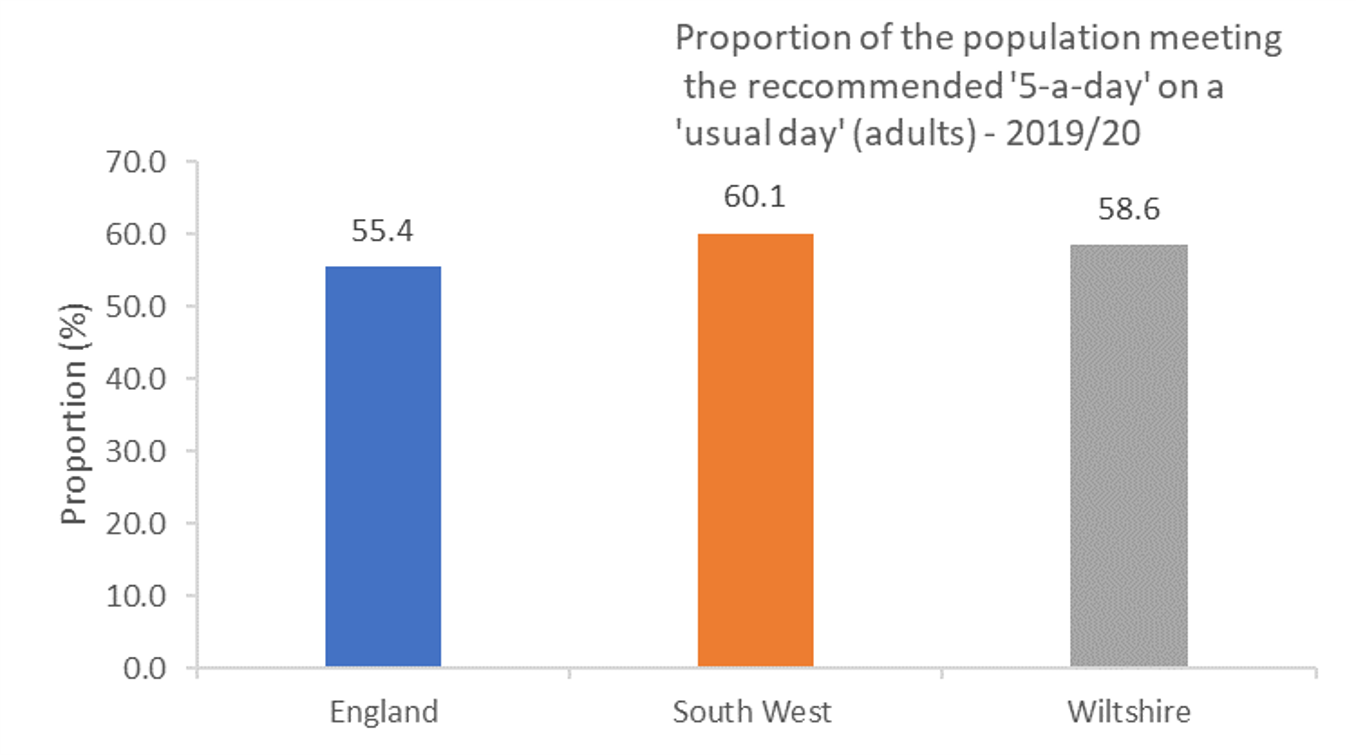 The proportion of adults reporting that they meet the recommended 5 portions of fruit and vegetables on a usual day has remained consistent in recent years, with 58.6% of adults in Wiltshire reporting they meet the recommended amount in 2019/20. This is similar to the proportions seen in 2019/20 in South West (60.1) and slightly higher than England (55.4%).

The national lockdowns in England, implemented by the goverment as part of the COVID-19 restrictions, meant that people were spending more time at home than ever. One in three workers were based exclusively at home in the Spring 2020 lockdown and nearly 90% of children of school age had been homeschooled.

During the lockdowns, limited exercise outside the home was permitted, but restricted to the local area, making access to local parks and public gardens important.

Source: 'How has lockdown changes our relationship with nature?', April 2021, ONS and Coronavirus and homeschooling in Great Britain: April to June 2020, July 2020, ONS 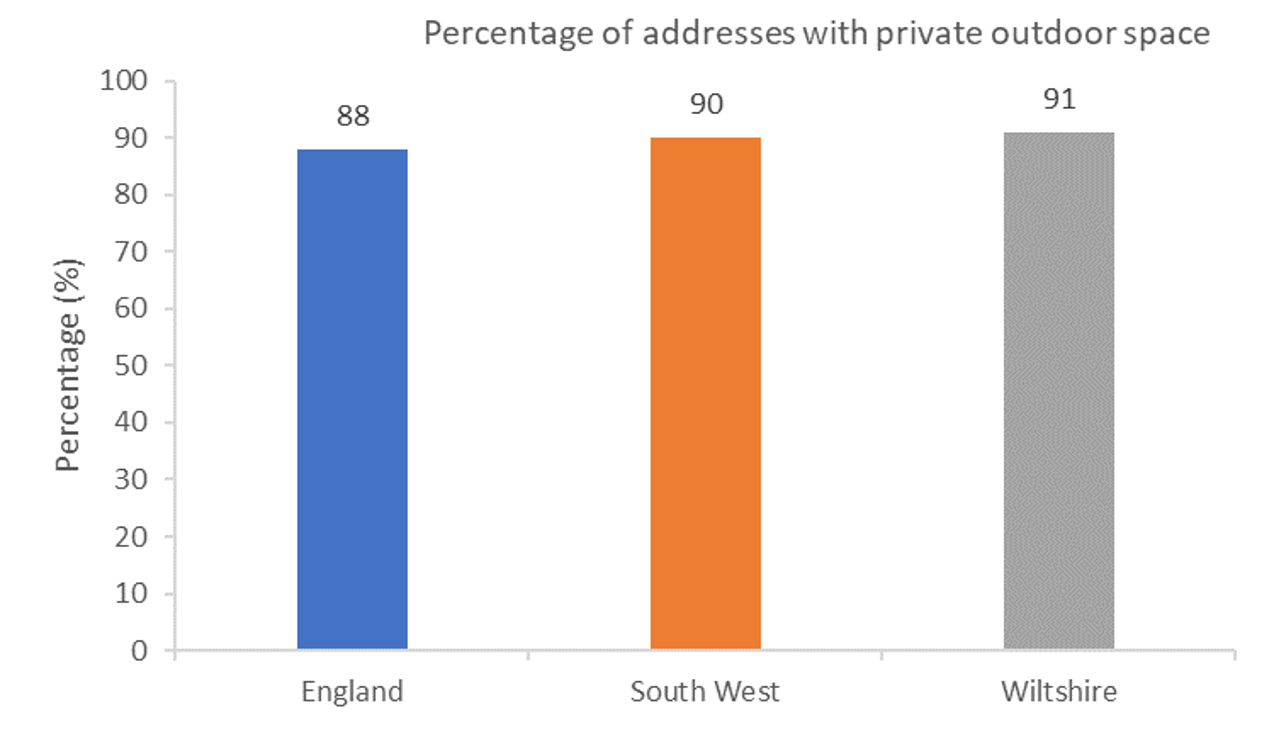 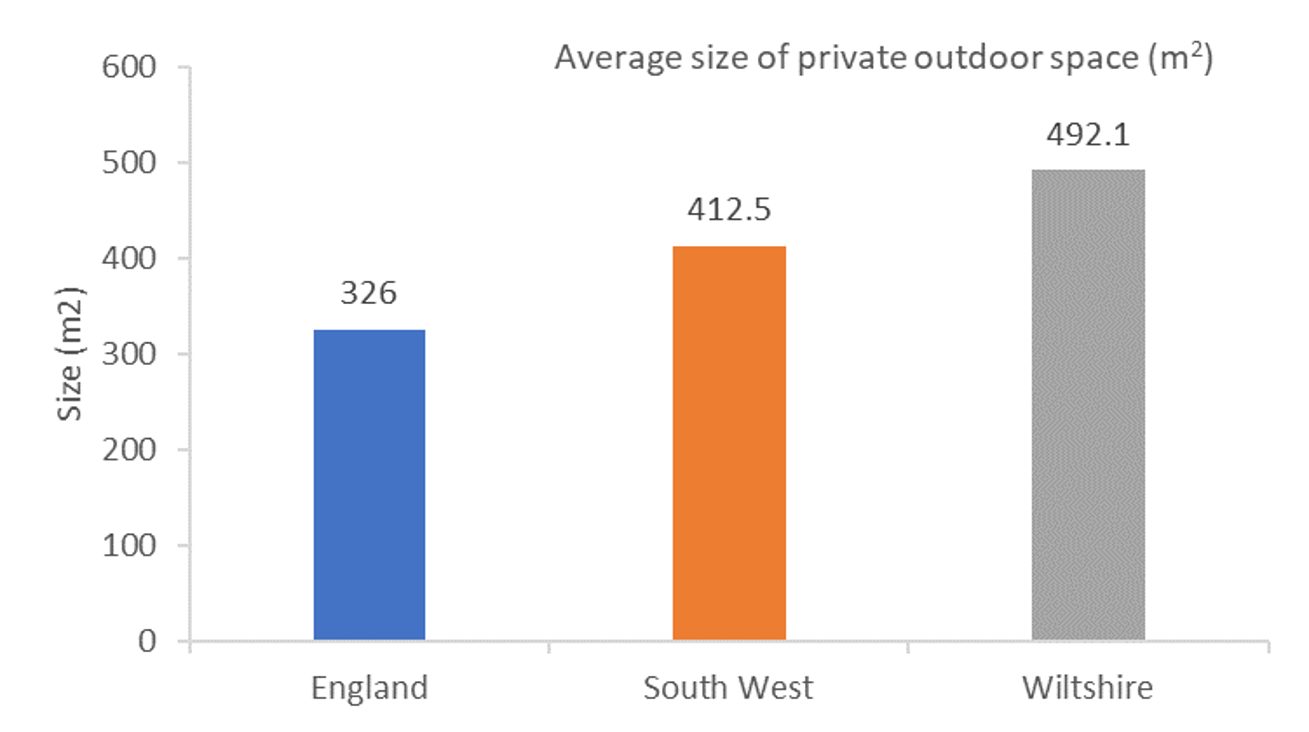 Whilst Wiltshire has a similar percentage of addresses with private outdoor spaces to the South West and England, the average size of outdoor space is significantly larger for properties in Wiltshire, at 492m2, in comparison to South West (413m2) and England (326m2).

Source: Access to gardens and public green space, ONS, May 2020 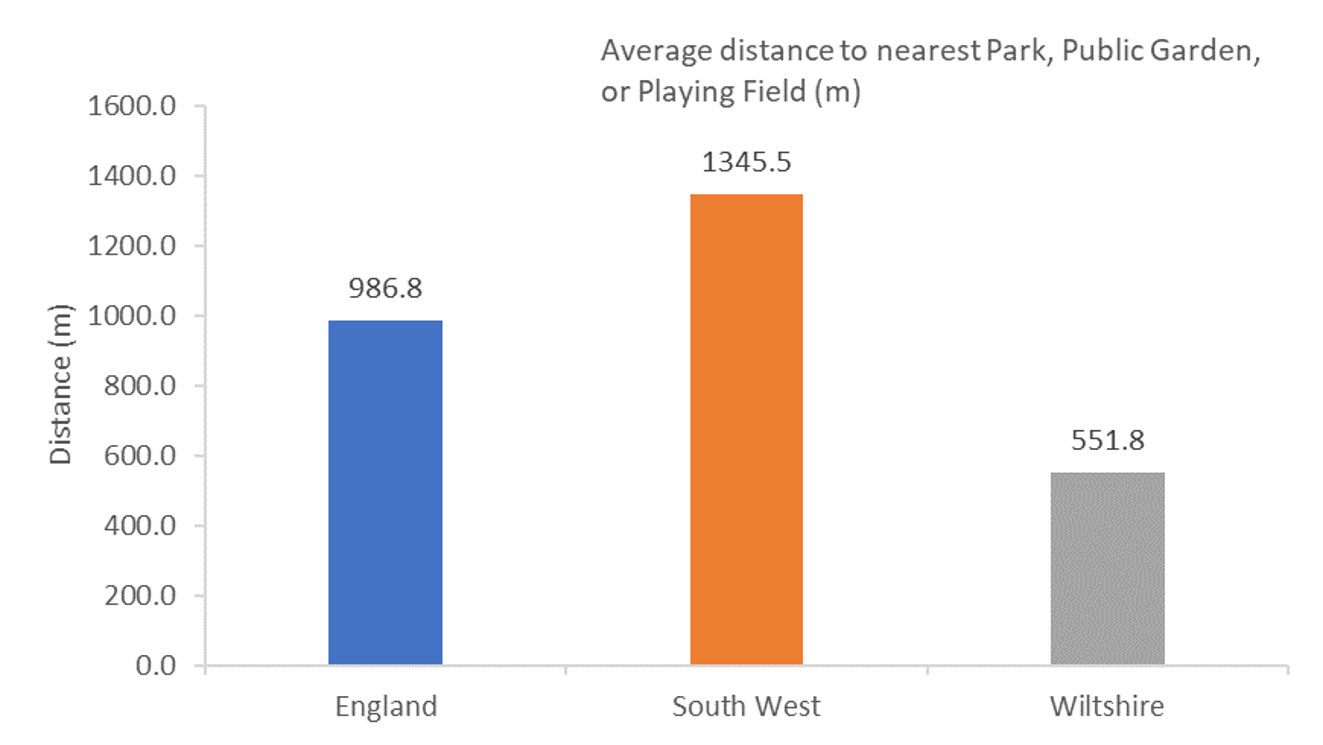 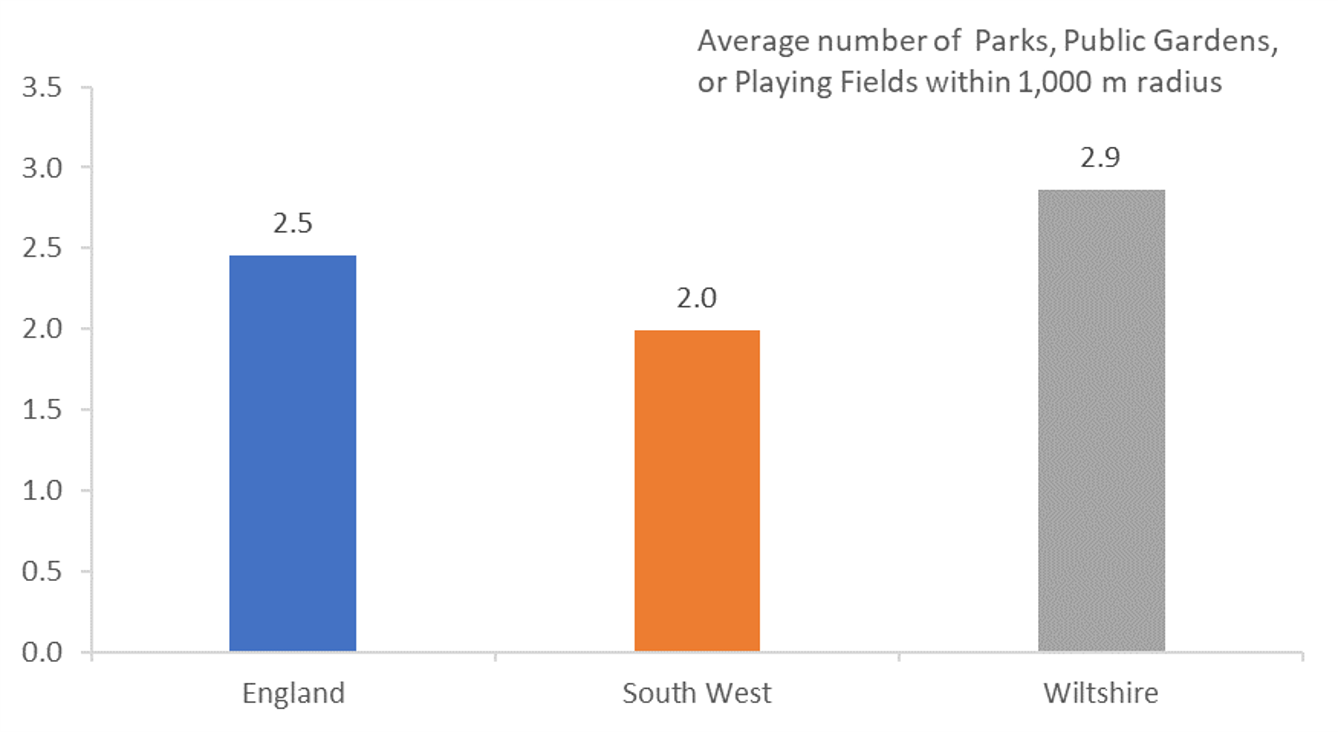 Source: Access to gardens and public green space, ONS, May 2020 .

The risk of getting coronary heart disease can be reduced by making several lifestyle changes, including eating a healthy balanced diet, being physically active and keeping to a healthy weight 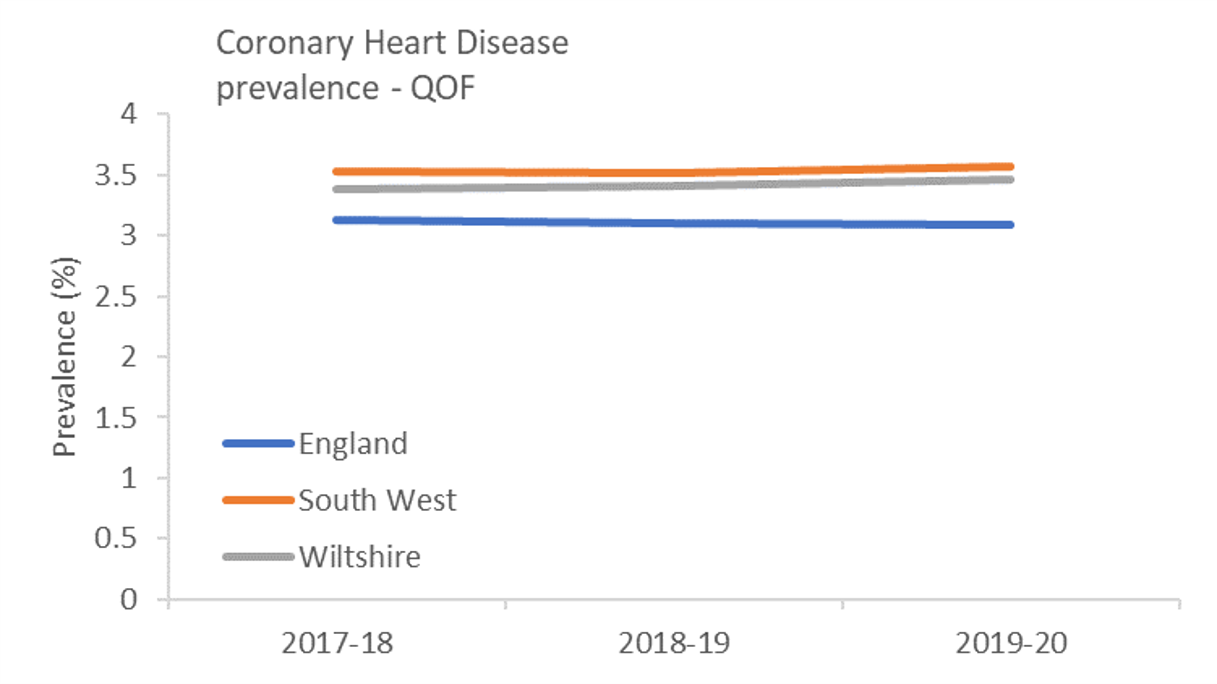 Prevalence of Coronary Heart Disease has remained fairly steady over the past 3 years. Prevalence within Wiltshire was 3.5% in 2019/20, lower than South West (3.6%), yet higher than England (3.1%)

A number of factors can increase a persons risk of hypertension (high blood pressure) including:

- eating too much salt and not enough fruit and vegetables 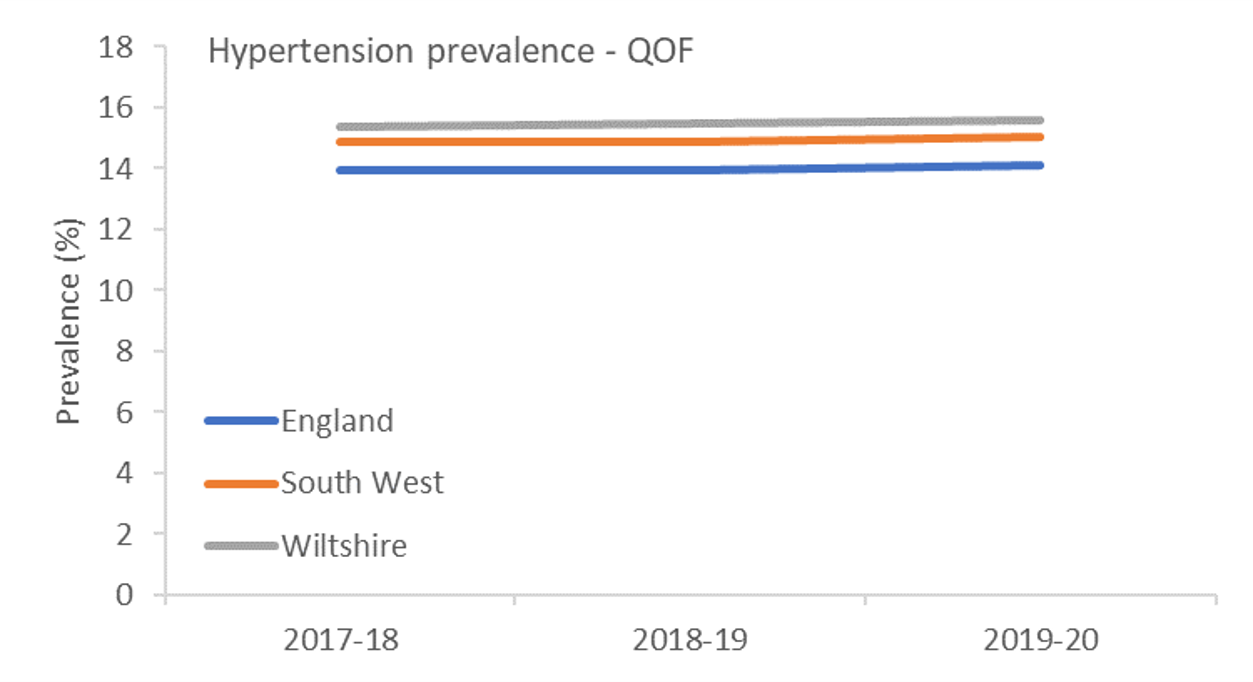 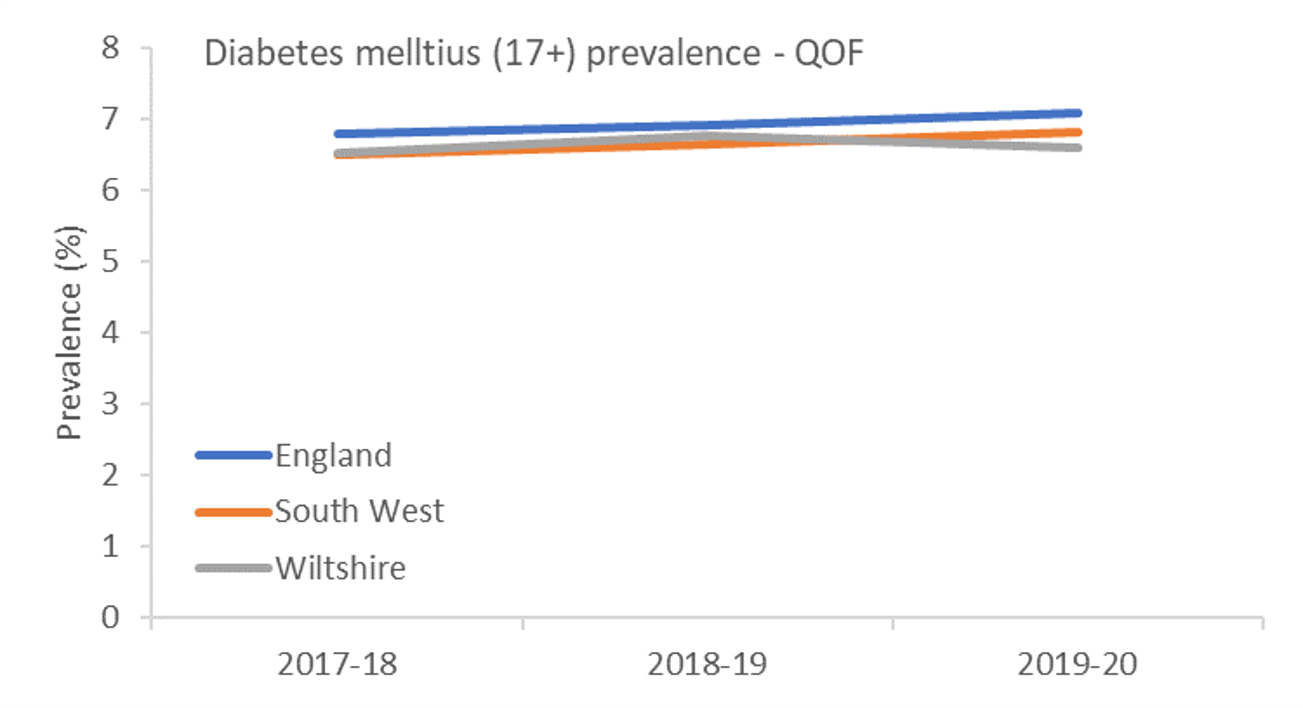 The prevalence of diabetes in those aged 17+ in Wiltshire has remained at a similar level over the past three years, most recently at 6.6% in 2019/20. This is slightly lower than the prevalence for South West (6.8%) and  England (7.1%).

Admissions for diabetes for children aged 0 to 9 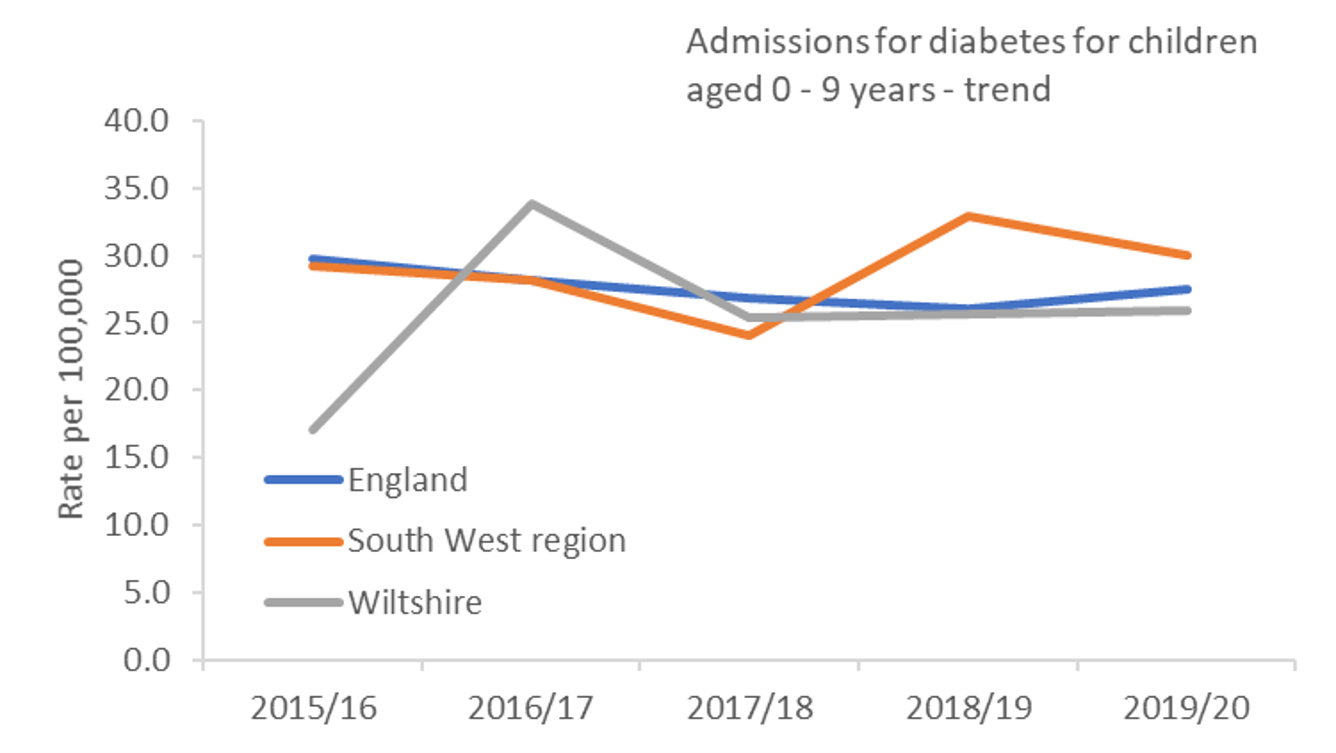 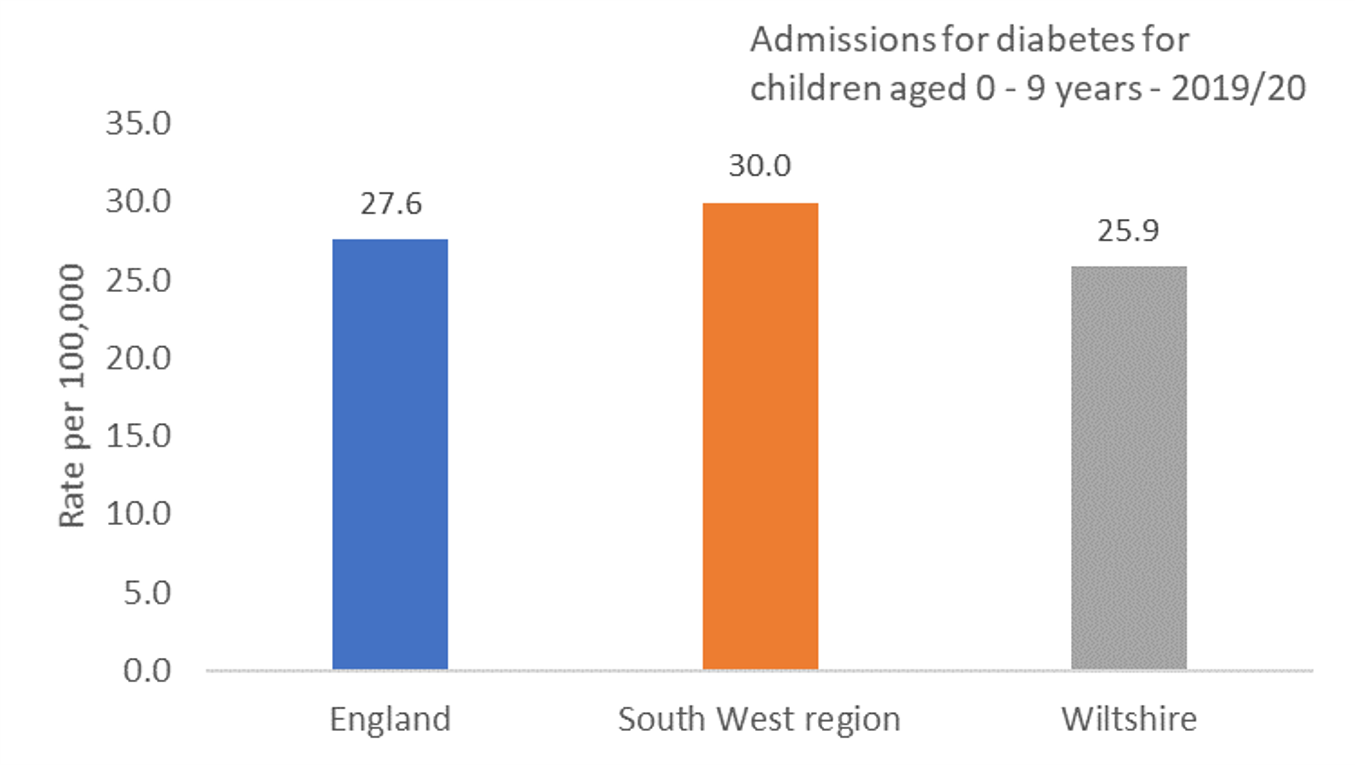 Admissions for diabetes for children aged 10 to 18 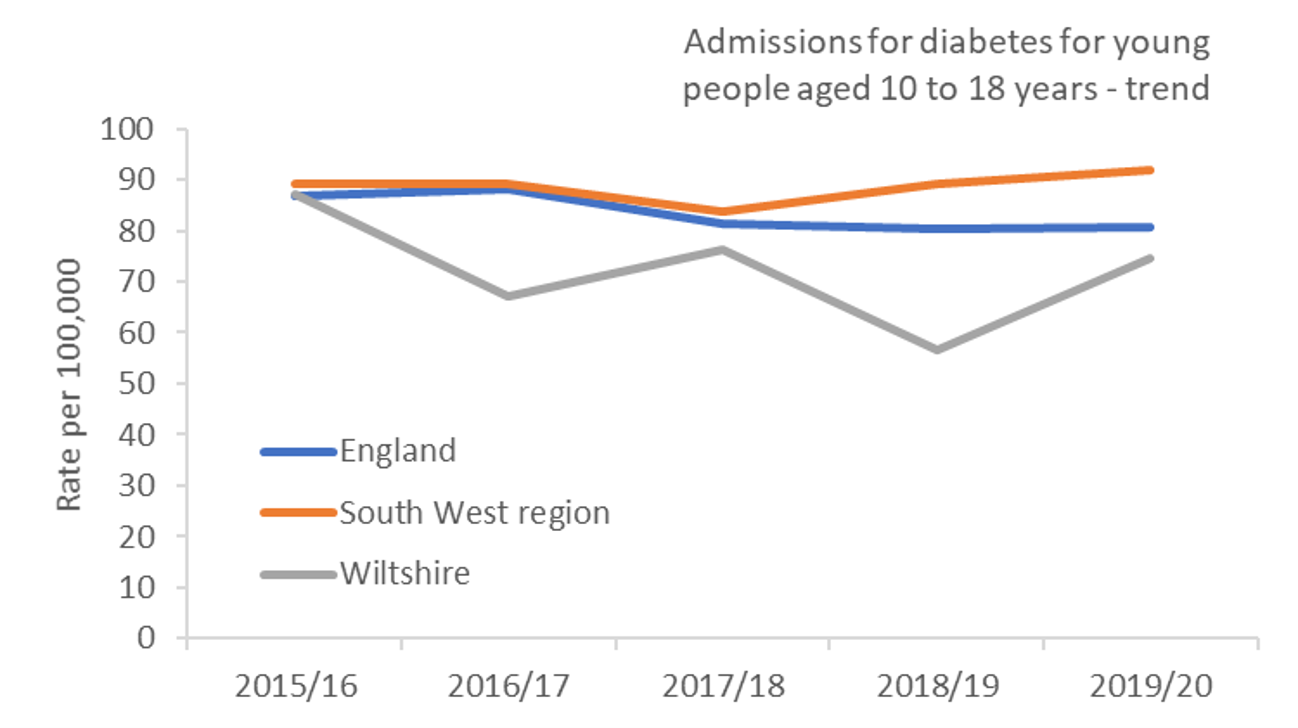 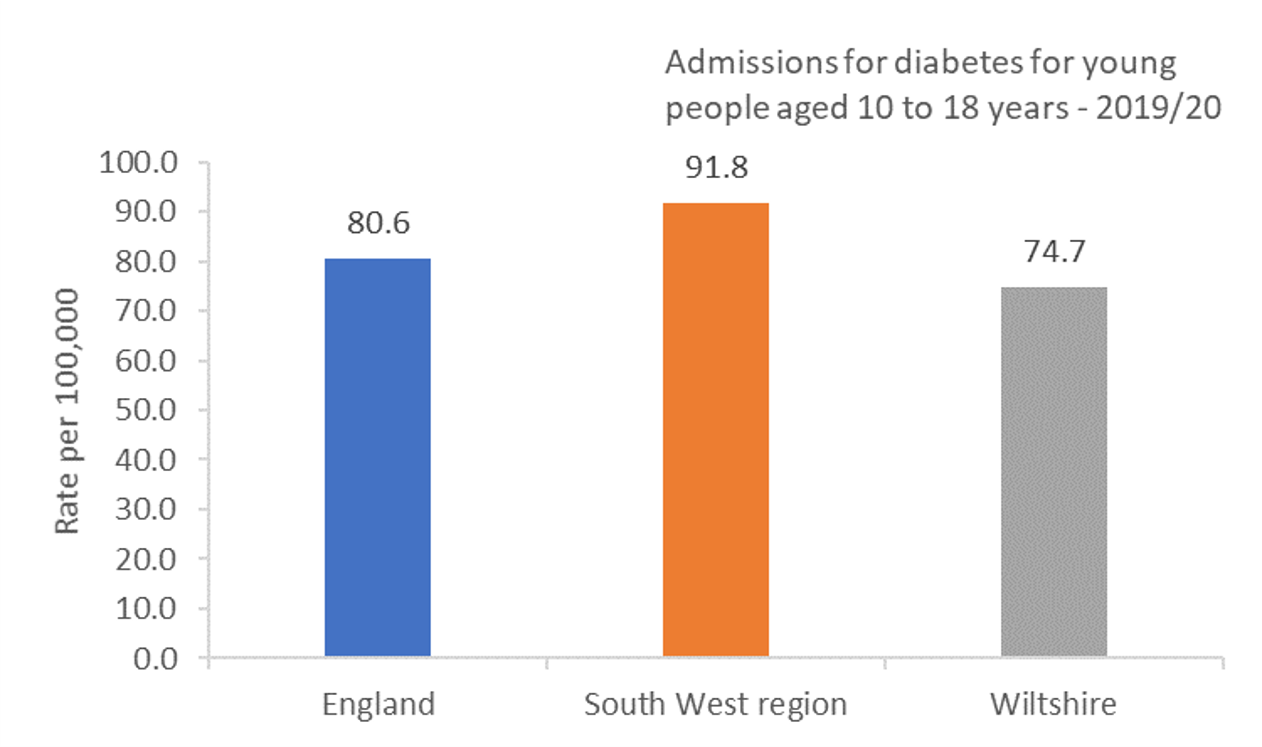 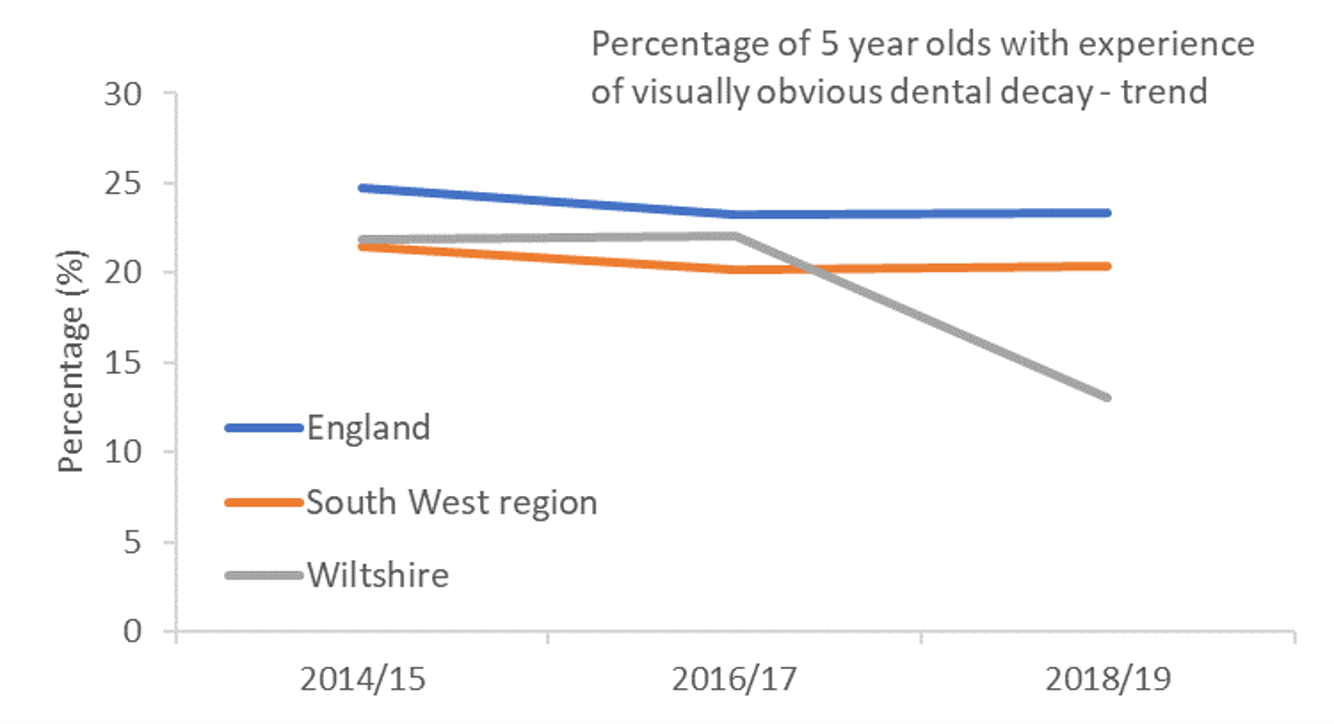 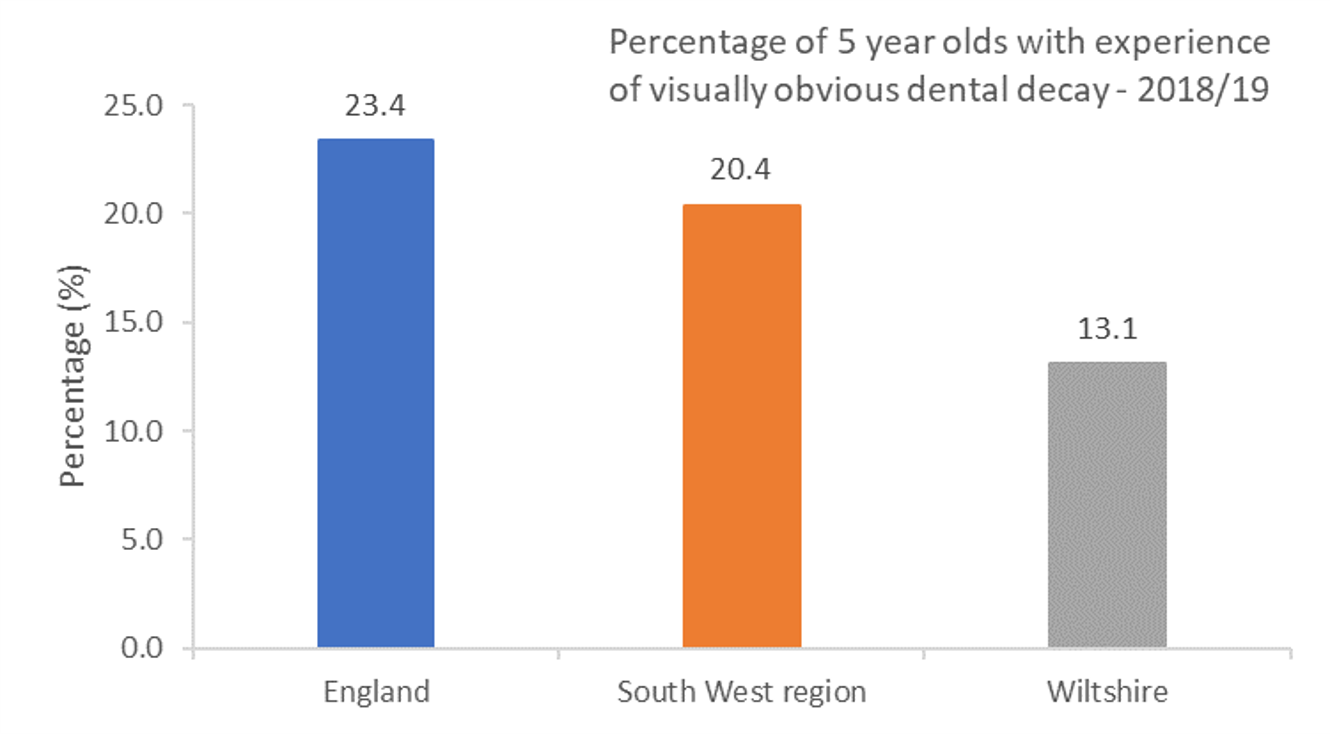