Recovery JSNA: Substance Use and Misuse

The COVID-19 pandemic has brought major challenges to healthcare systems and public health policies globally.  Treatment and prevention strategies have had to adapt for the impact of the pandemic. Individuals with substance user disorders (SUD) are an at risk population for contamination due to multiple factors—attributable to their clinical, psychological and psychosocial conditions. Moreover, social and economic changes caused by the pandemic, along with difficulties in treatment access and adherence are likely to have worsened during this period, therefore aggravate their condition. Health care professionals dealing with SUD must be aware of the risks and challenges they will meet after the COVID-19 outbreak. Addiction care should be reinforced, in order to avoid ongoing complications of SUD.

In addition to substance misuse there are mixed stories about alcohol consumption and smoking habits during the course of the last year.  Initially there were stories about supermarket shelves emptying of alcohol alongside the basics, but with the closure of pubs and restaurants overall alcohol consumptions may have fallen slightly. There were mixed messages around the impact of smoking on COVID-19 risks and there is some evidence that smoking prevalence may have increased as a result of the pandemic and the research and measure taken to control spread.

This chapter covers the following:

Recovery Homepage
Back to the Top

Alcohol misuse is the biggest risk factor for death, ill-health and disability among 15-49 year olds in the UK, and the fifth biggest risk factor across all ages. Alcohol is a causal factor in more than 60 medical conditions, including: mouth, throat, stomach, liver and breast cancers, high blood pressure, cirrhosis of the liver, and depression. Alcohol use has health and social consequences borne by individuals, their families, and the wider community.

Survey taken during and after the initial lockdown in 2020 showed a trend of people drinking less during this unprecedented time this appears to be supported by Nielsen data which suggests that in the 17-week period covering lockdown to 11 July 2020 that people in Britain consumed almost 1.3bn litres of alcohol during the UK’s lockdown period, almost half the 2bn litres consumed in the same period last year. This is further reinforced by data from HMRC which shows there has been a £151m drop in alcohol duty receipts in the period from January to July 2020 compared to the same period in 2019.

It is estimated that over a quarter of the adult population in Wiltshire are drinking more than the recommended 14 units of alcohol per week. This is higher than the average in England and the South West.

It is estimated that around 1% of adults in Wiltshire are dependent on Alcohol which is lower than the England and South West average. 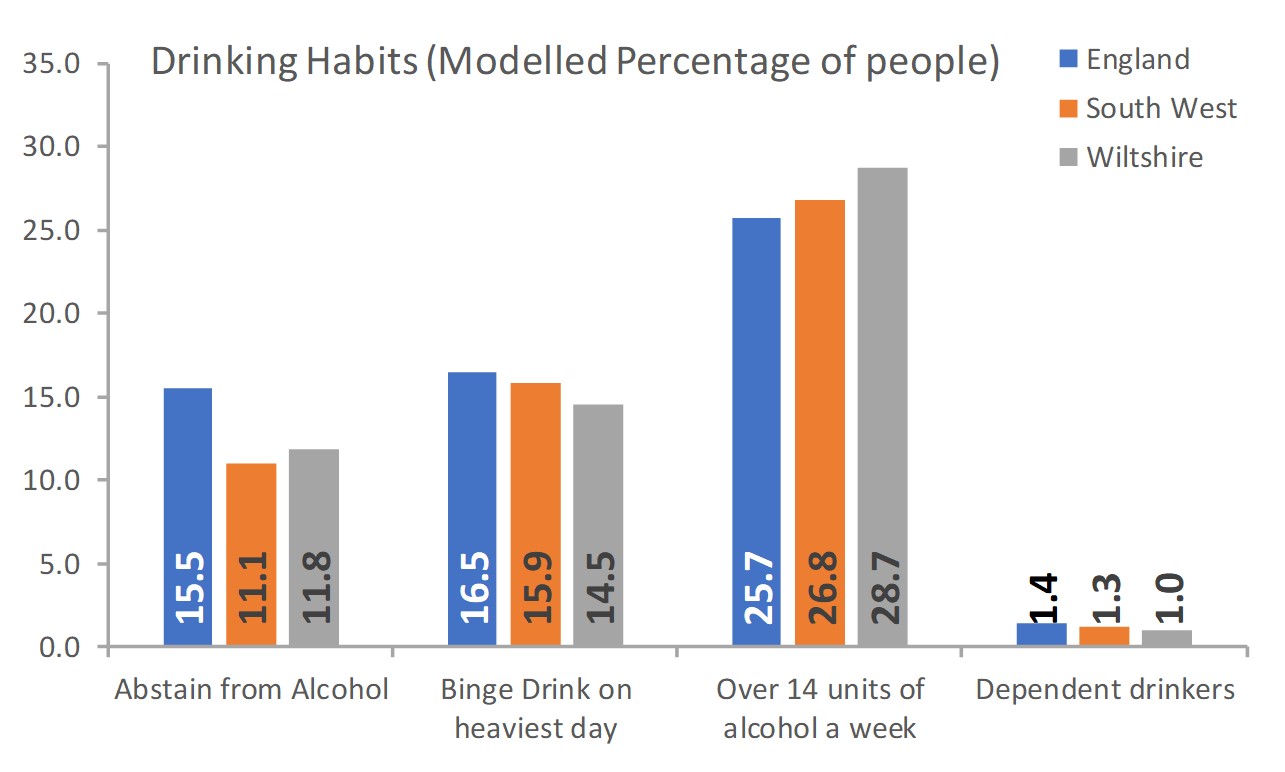 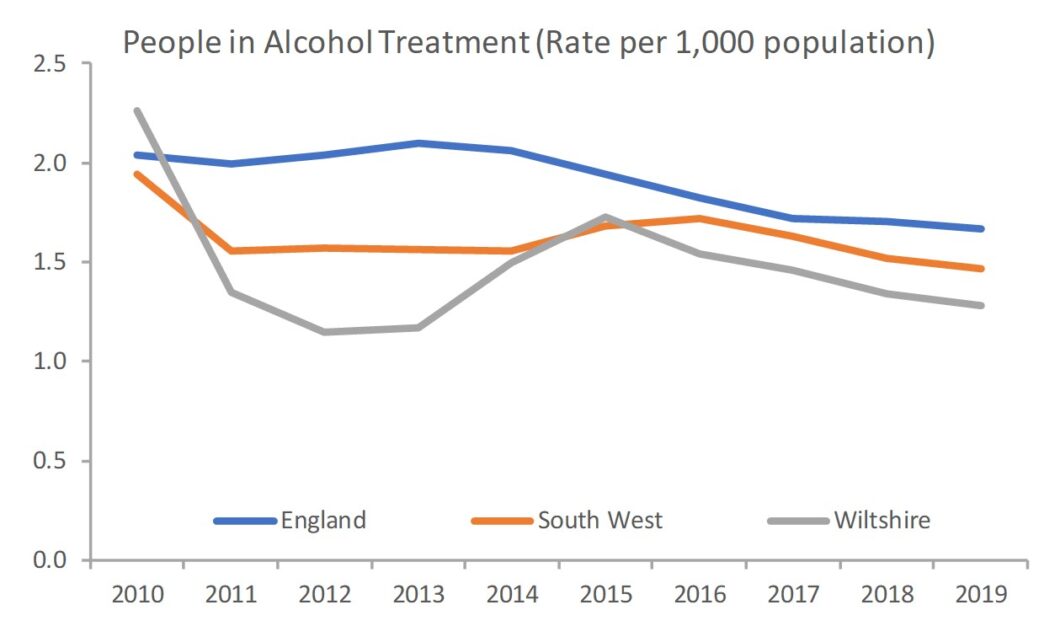 The rate in Wiltshire is lower than that seen in the South West and England. 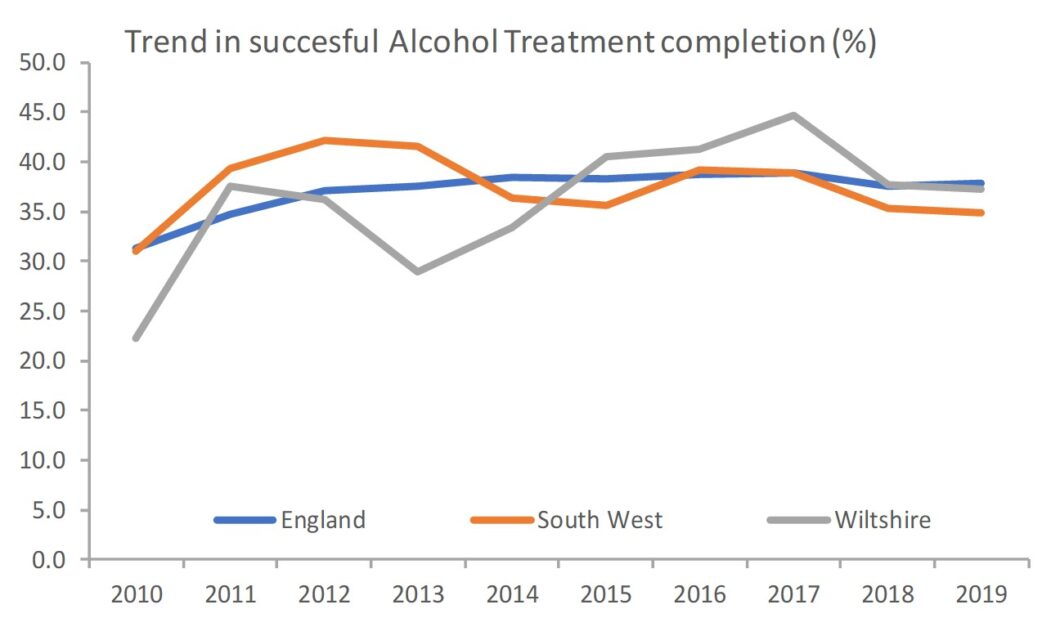 During 2020-21 there has been a reduction in the number of people in contact with Alcohol Treatment services from around from around 560 in February 2020 to around 480 in January 2021.

During 2020-21 there has been a reduction in the number of people in contact with Alcohol Treatment services from around from around 560 in February 2020 to around 480 in January 2021. 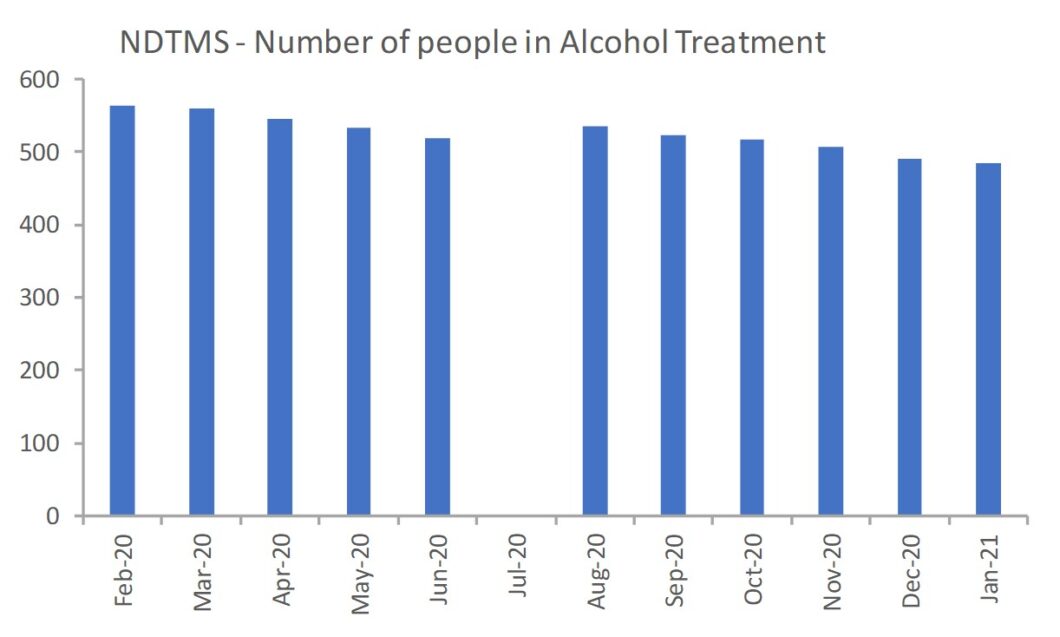 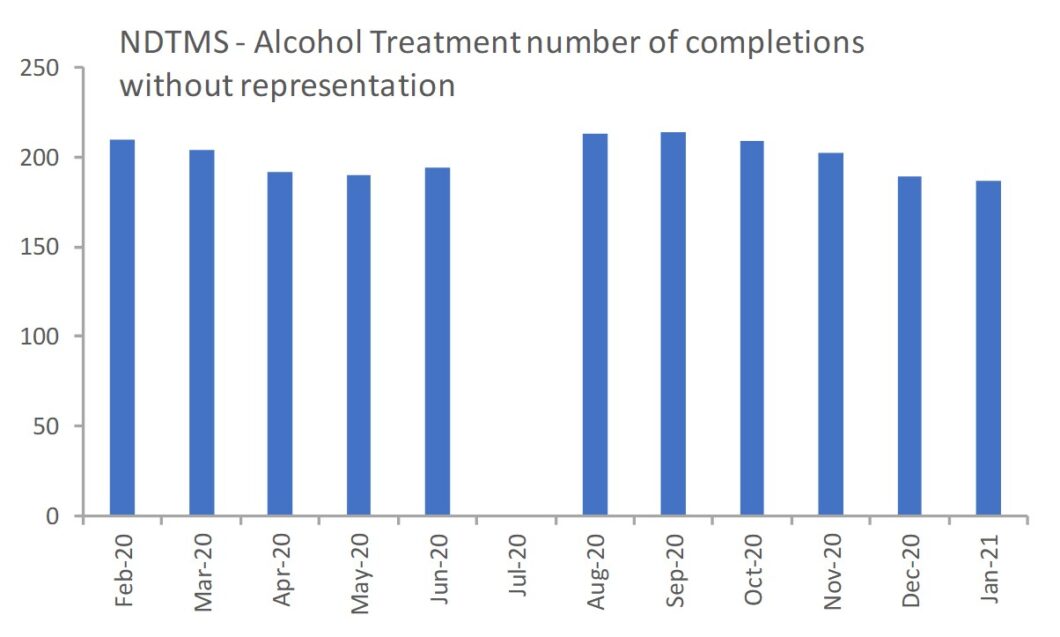 Successful completion of alcohol treatment services has also dropped from around 210 in February 2020 to around 185 in January 2021.

This drop is less than that seen in clients so is likely to be caused by the drop in clients than in a deterioration in the service offered.

Smoking remains the leading cause of preventable illness and premature death in England. In 2016 alone, there were estimated to be 77,900 deaths attributable to smoking, representing 16% of all deaths across the UK. In Wiltshire it is estimated that there were 646 early deaths due to smoking.

Our smoking prevalence rates have continued to decline year on year and are now at a record low with 14.9% of people aged 18 years and above being smokers. However, inequalities persist and there are still groups where smoking rates remain stubbornly high, such as among people in manual occupations and individuals who suffer with a serious mental illness. Anecdotal evidence suggests smoking prevalence may have increased in the last year we cannot therefore be complacent about the need for tobacco control and smoking cessation support.

In England, around 60% of smokers want to quit, 10% of which intend to do so within 3 months. Currently, around half of all smokers in England try to quit unaided using willpower alone, despite this being the least effective method. Getting support can greatly increase a person’s chances of quitting successfully.

There is a widespread misconception amongst smokers and health professionals that most of the harm of smoking comes from nicotine. This is perhaps the greatest obstacle we face as it leads to both nicotine replacement therapy (NRT) and e-cigarettes being perceived as harmful and as a result, smokers may not make a quit attempt using one of these routes. Wider tobacco control measures help to reduce the availability of tobacco which promotes non smoking as the norm.

There is a Government ambition to reduce smoking prevalence to 5% or less by 2030.  To support this, treating tobacco dependence will become part of the treatment pathway for all inpatients in hospitals including mental health trusts, and all pregnant women as part of the NHS Long Term Plan prevention work stream. A new national Tobacco Control Plan is due to be published later in 2021 which will also provide further direction and guidance in address smoking prevalence. 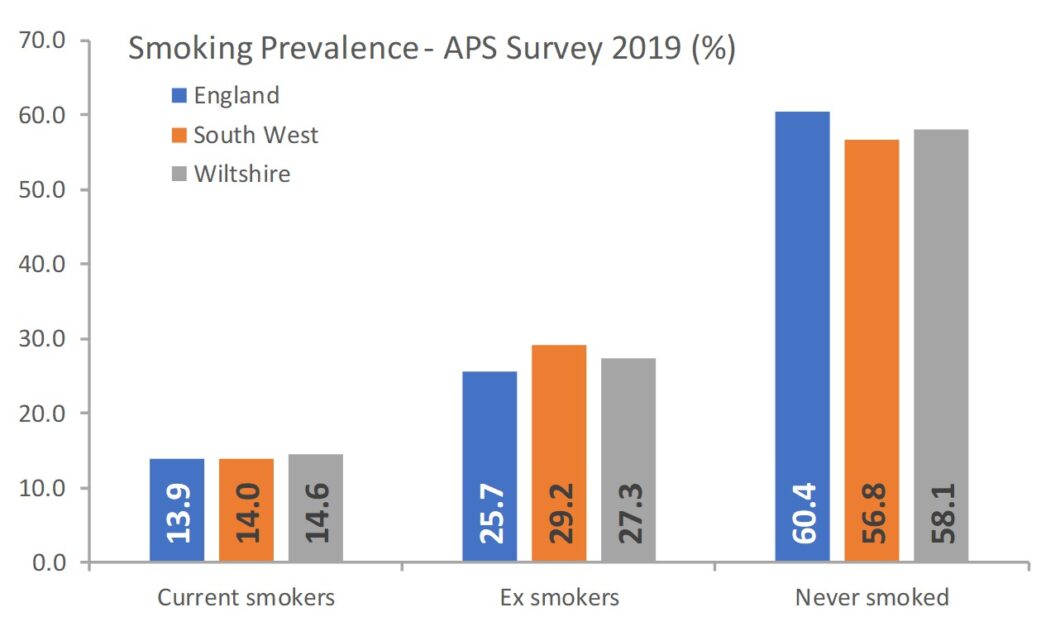 It is estimated that around 15 of adults in Wiltshire are currently smokers, this is marginally higher than the prevalence seen in England and the South West.

The proportion of ex-smokers in Wiltshire is around 27% which is higher than the estimates in England but lower than the South West.

Smoking prevalence in at risk groups

Smoking prevalence within routine and manual workers is nearly double the Wiltshire average and higher than the England and South West averages.

In Adults with a long term mental health condition smoking prevalence is around 50% higher than the Wiltshire average and lower than the England and South West averages. 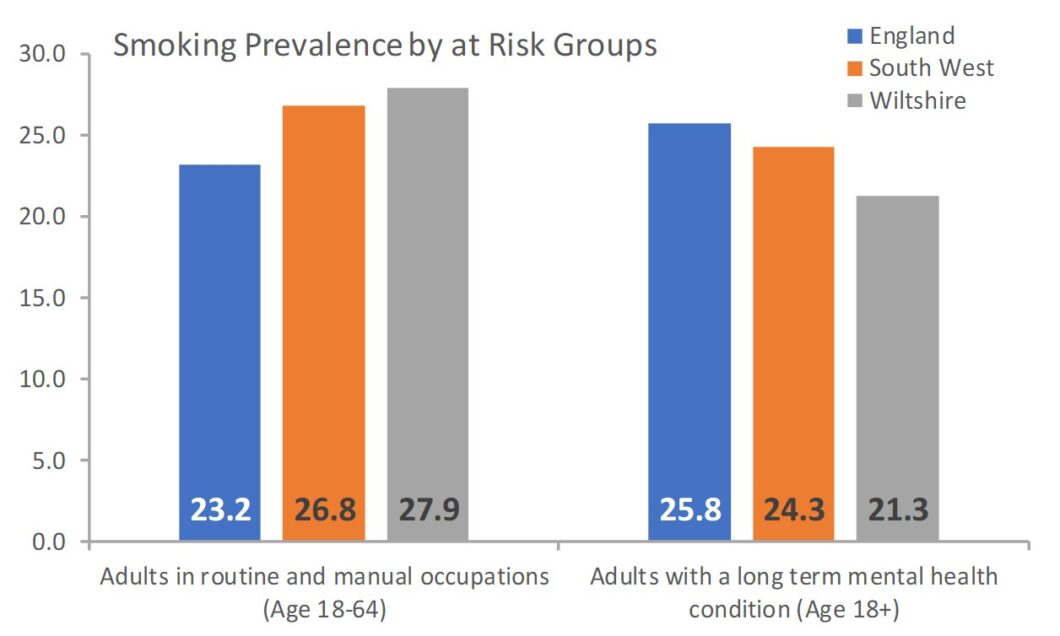 From 2014-15 to 2017-18 the rate of smokers setting a quite date in Wiltshire was lower than the England and South West averages.  In the last couple of years it has stabilised and is now broadly similar. 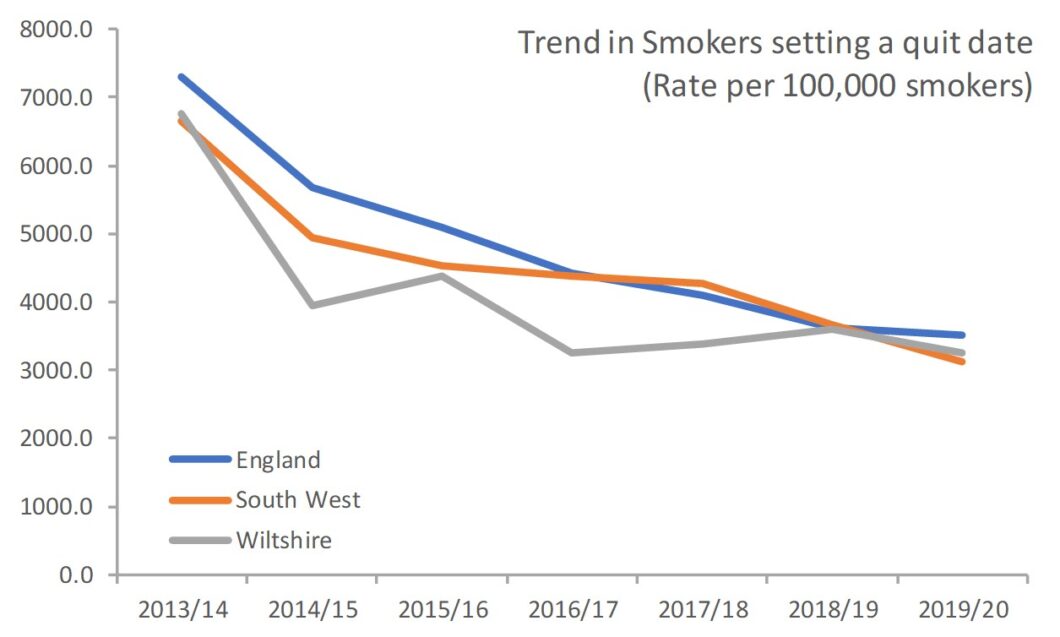 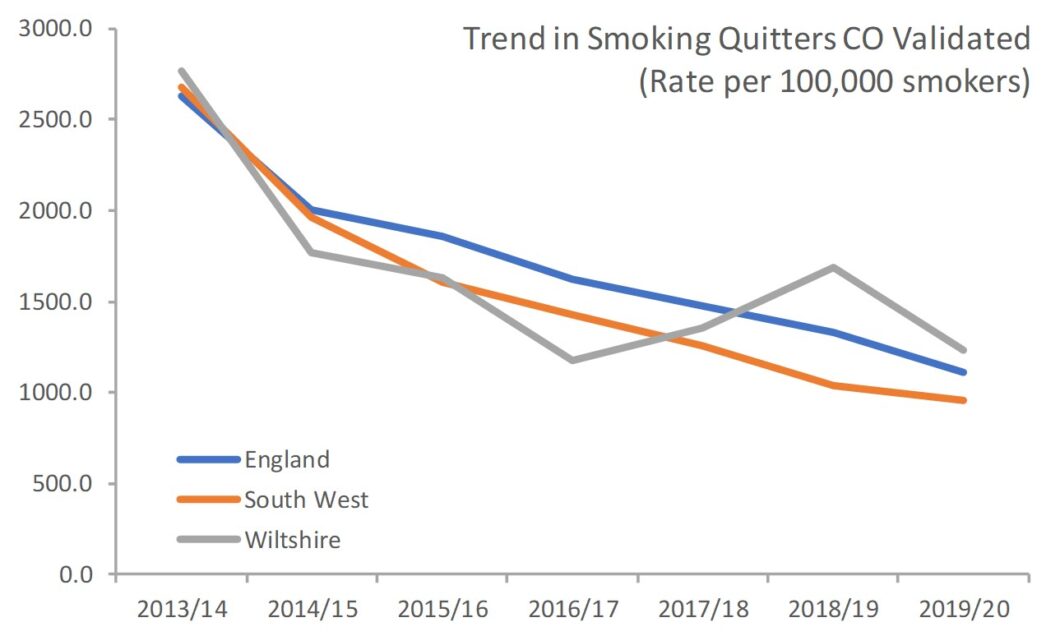 In Wiltshire during 2019-20 around 38% of smokers who set a quit date successfully quit with a validated CO measurement. This is lower than the 47% in 2018-19 but remained above the national standard of 35%.

Wiltshire has been consistently higher than the average in England and the South West. 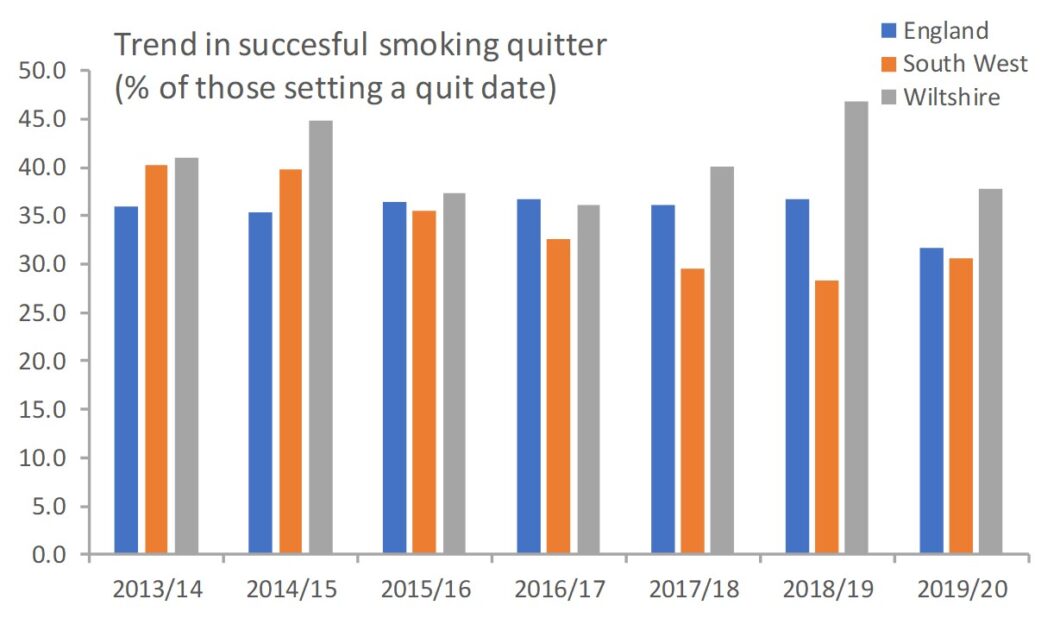 Smoking at time of delivery is recorded over time. In 2019/2020 smoking status at time if delivery in England and Wiltshire were similar, where the percentage was 10.4% and 10.1% respectively. Whereas the status of smoking was higher in the Southwest region of 11%. 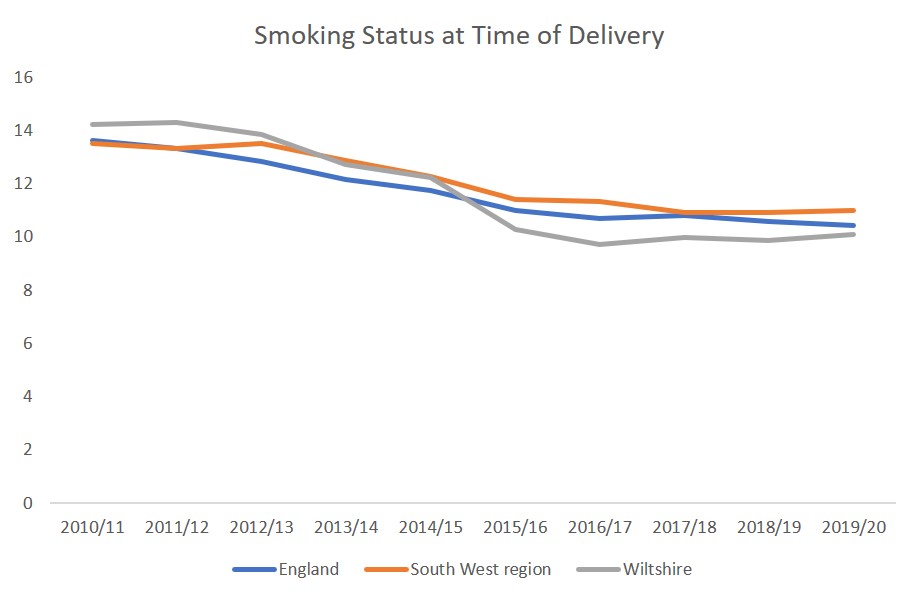 Hospital admissions attributed to smoking is recorded over time. Overall, the cases numbers are slowly reducing. During 2019/20 Wiltshire rate was 997 cases per 100,000. This is lower as compared to England and Southwest rates which were recorded as 1398 and 1413 per 100, 000 respectively.

Drug misuse and dependency can lead to a range of harms for the user including:

But drug misuse also impacts on all those around the user and the wider society. To be effective, balanced solutions to drug demand and supply must be rooted in evidence and shared responsibility. This is more important than ever, as illicit drug challenges become increasingly complex, and the COVID-19 crisis and economic downturn threaten to worsen their impacts, on the poor, marginalised and vulnerable most of all. 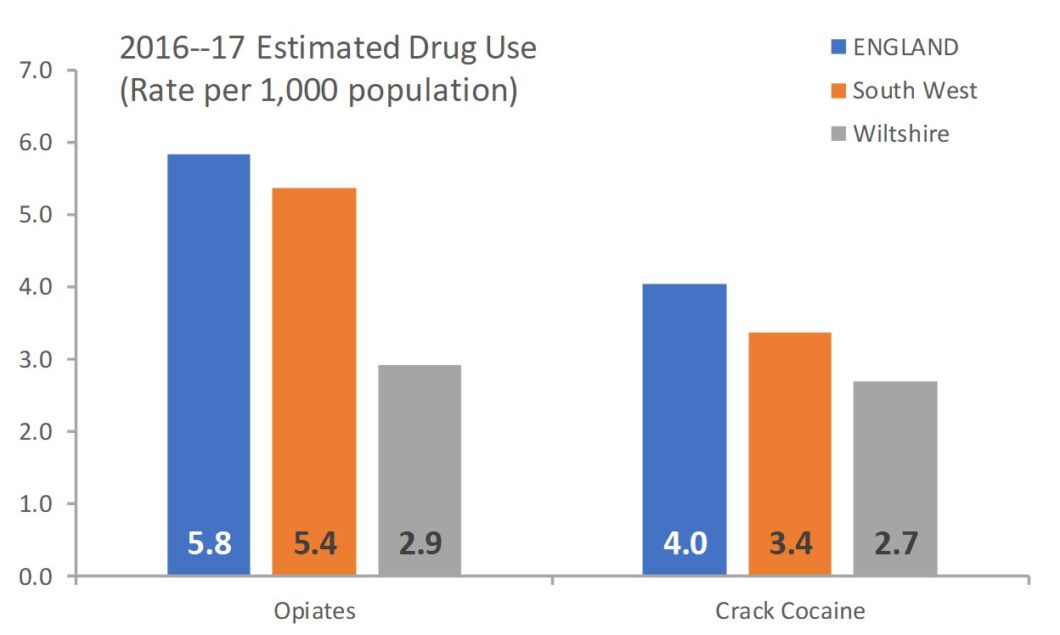 These are both lower and the average in England and the South West.  It is worth noting that the proportion of opiates to cocaine use is higher in Wiltshire.

During the pandemic guidance was issued to Drug and Alcohol Treatment Services recognising their efforts of the as an essential and highly valued element of our national response to COVID-19.

That the utmost care should be taken of both staff and service users, who are likely to come under additional stress during this difficult and unsettling time.

People who misuse or are dependent on drugs and alcohol may be at increased risk of becoming infected, and infecting others, with COVID-19. They may also be more vulnerable to poor health outcomes due to underlying physical and mental health conditions, which may have worsened due to the pandemic.

In 2019 there were 46 successful  completions from a total of 549 clients in opiate drug treatment services in Wiltshire. This is around 8% which is higher than the England and South West averages.

Performance in Wiltshire has been variable but has generally been higher than the England and South West averages. 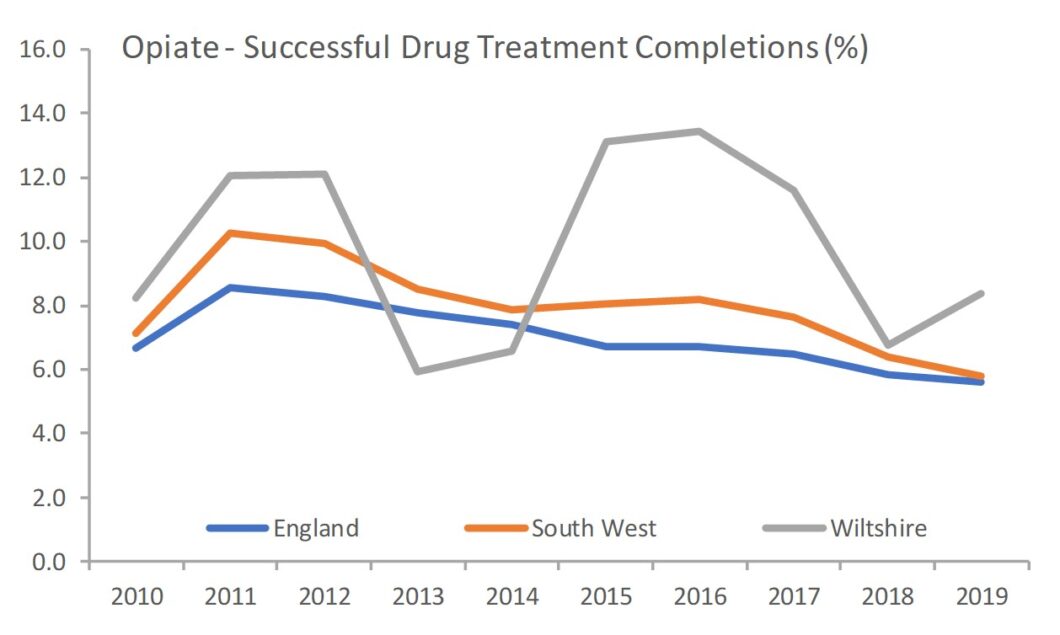 In 2019 there were 85 successful  completions from a total of 294 clients in opiate drug treatment services in Wiltshire. This is around 29% which is lower than the England and South West averages.

Performance in Wiltshire has been variable but has generally improved in the last few years and has been broadly similar to the England and South West. 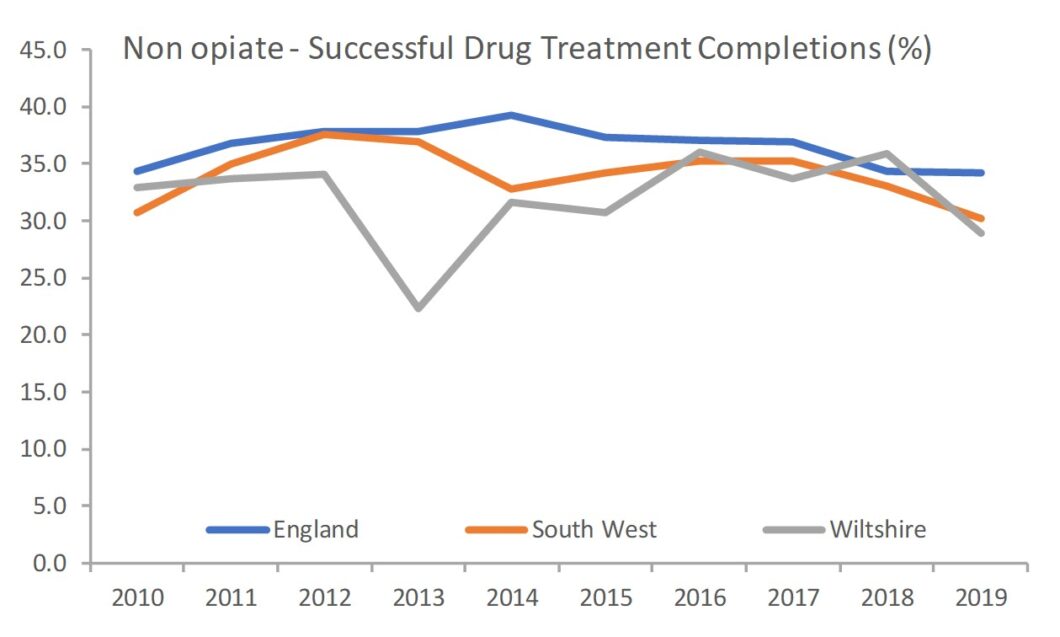 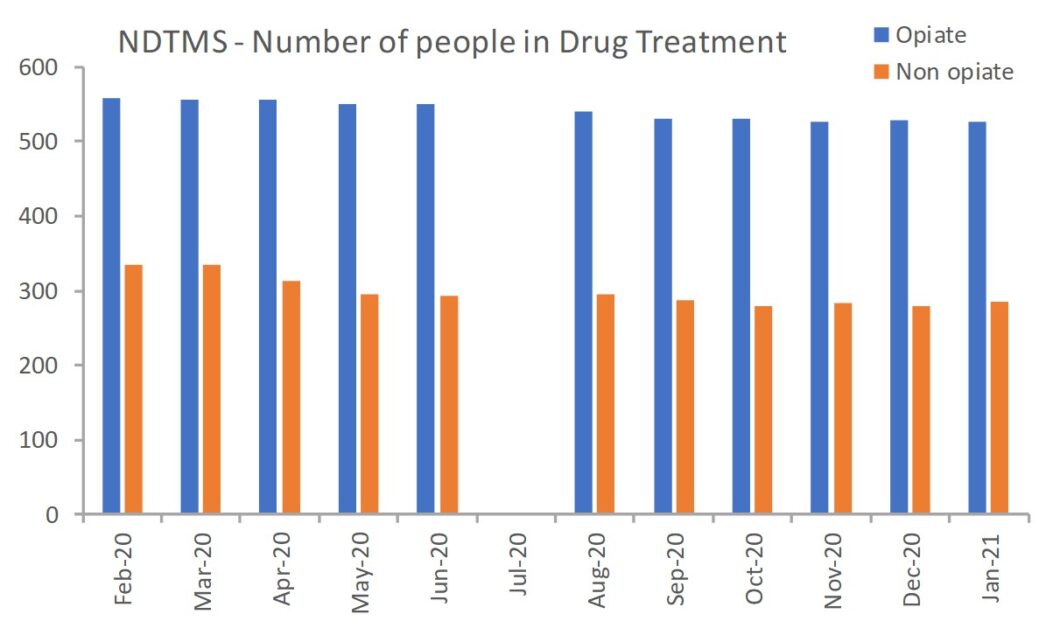 In Wiltshire there has been a small reduction from around 550 to around 525 in the number of clients in drug treatment for opiate based drugs.

The drop in clients in Wiltshire for non-opiate based drugs is greater from around 330 to 285 clients.

Successful completions for those in opiate based treatments has remained over 40 per month during 2020-21.

The number of successful completions for non-opiate based services has reduced from over 100 to around 80. 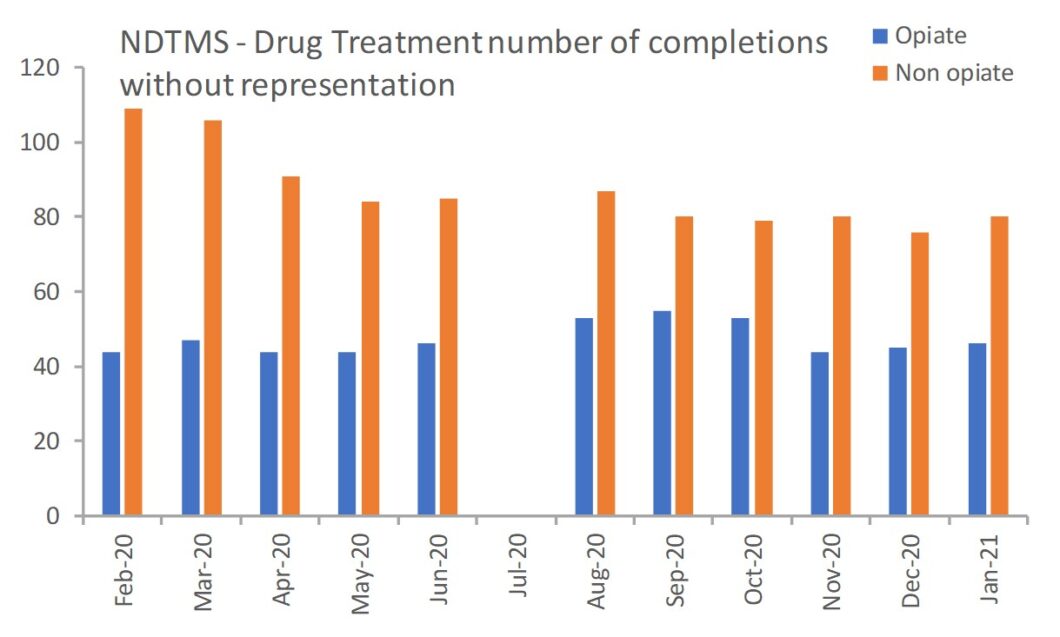 During 2017-18, Wiltshire council carried out a survey for young people across Wiltshire. They found 7% of young people were regular smokers, 15% frequently consumed alcohol and 17% consumed drugs frequently.