This JSNA chapter attempts to provide understanding the impact the pandemic has had on the economy in Wiltshire.

The economy is a complex system. Data at a small scale such as a local authority is often not possible to obtain and many datasets have a time lag. That said it is hoped that the chapter is still of benefit.

Recovery homepage
Back to the top

59% of the population is of working age 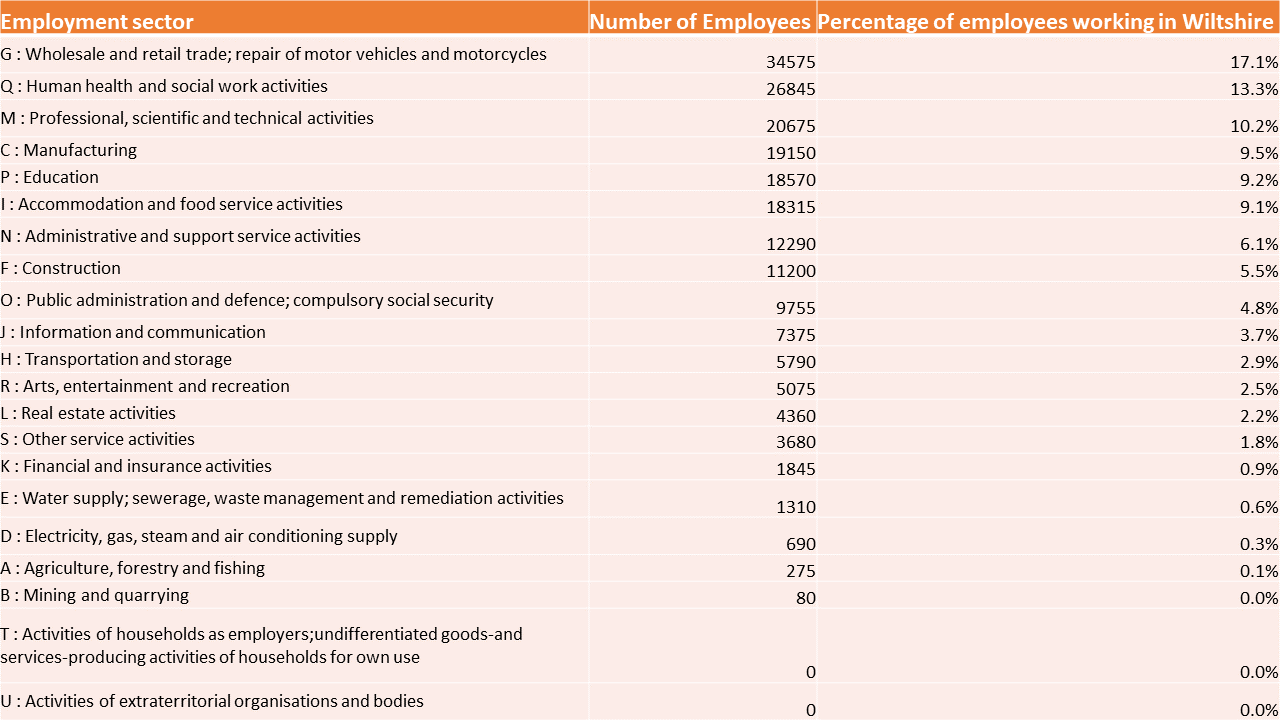 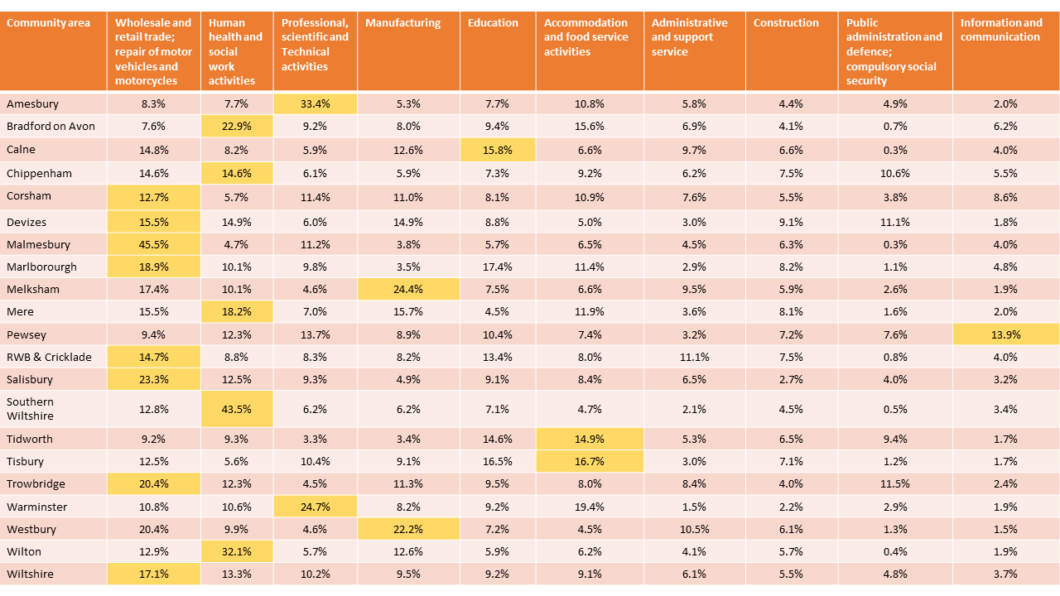 Coronavirus and the latest indicators for the UK economy and society

ONS publish a summary of the economic impact of Coronavirus every week.

Elements from the main point section of the 14th of January 2021 publication have been included here:

ONS publish a labour market overview every month. Elements from the main point section have been included here and on the following slide:

ONS have created a new voluntary fortnightly business survey, which captures businesses’ responses on how their turnover, workforce prices, trade and business resilience have been affected in the two-week reference period.

Regional breakdown is available for a select number of the results. Some of the results from the survey that ran 27th of July to 9th of August are provided in the table below. 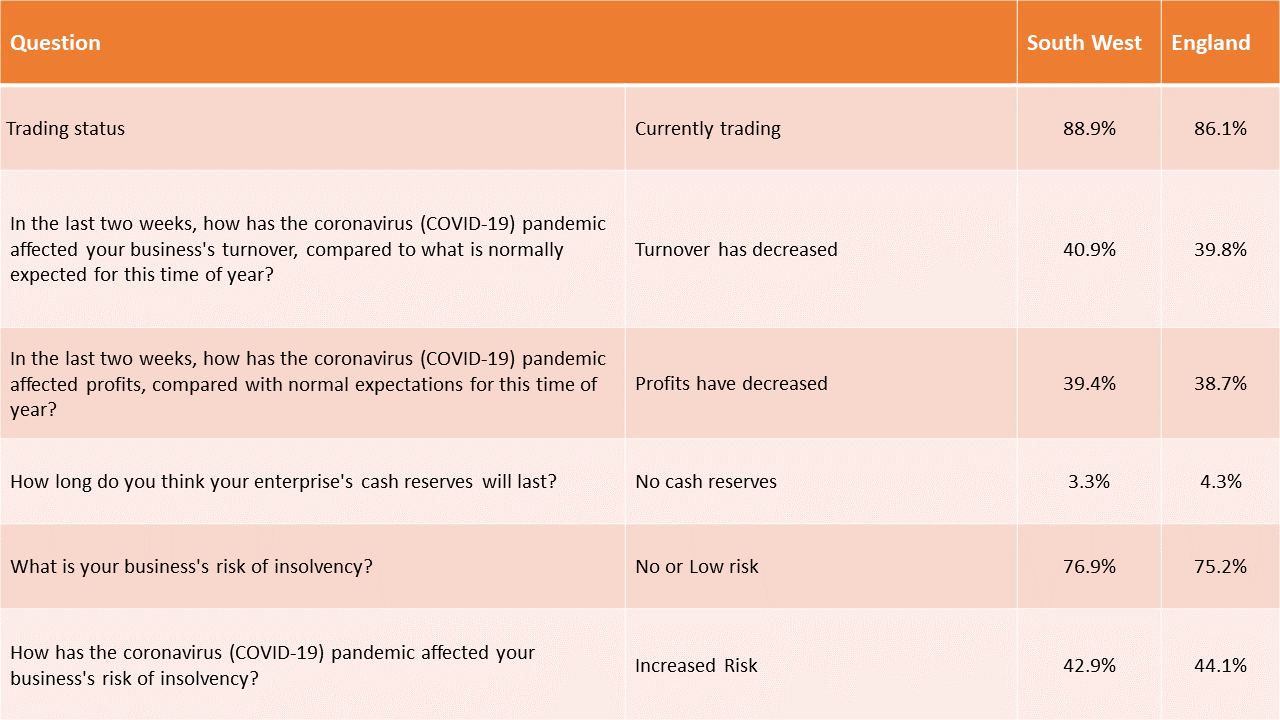 The ONS Business Impacts of Coronavirus Survey asks businesses, “Does your business expect to make any of your workforce redundant over the next three months?”.

Currently the percentage saying yes is around 3% and around a quarter are unsure.

The survey also asks “Approximately what percentage of your workforce do you expect to be made redundant over the next three months?”

Currently the overall percentage is around 2.3%, however in some sectors the proportion is higher like Accommodation & Food Services it is 5.1% and in Administrative And Support Service Activities it is 4.2%

National estimates exist from independent surveys. However, currently no estimate was found to have a robust enough methodology to be quoted here.

Employers are able to claim CJRS support for employees furloughed from 1 March 2020. CJRS provided employers with financial support of up to 80% of their employees’ salary.

In October 2020, the scheme was altered to allow flexible furlough, which allowed employees to work part time but still receive up to 80% of their salary for the time they were not able to work.

Slightly higher proportions of furloughed employments have been female than male.

HMRC has not yet published data following the second and third lockdowns and its impact on the number of furloughed employments.

The arts, entertainment, recreation and other services sector though not as large as the previously mentioned sectors has had one of higher proportional take-ups of furlough. 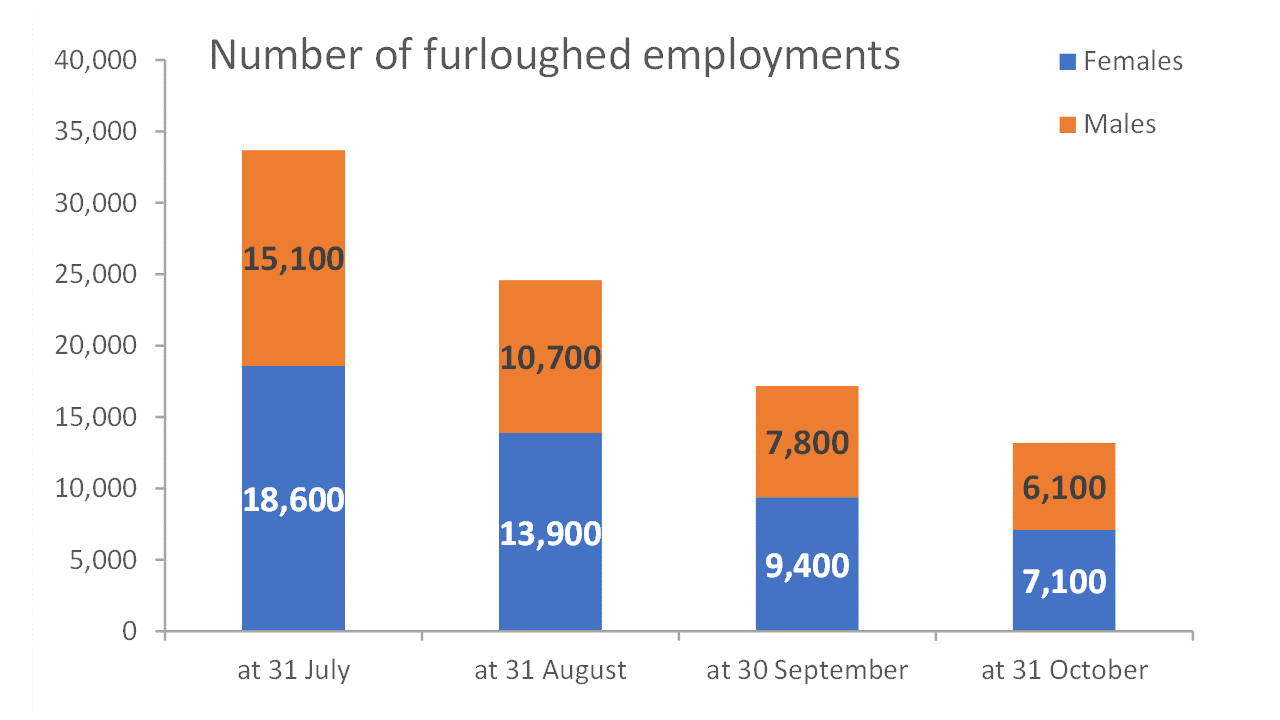 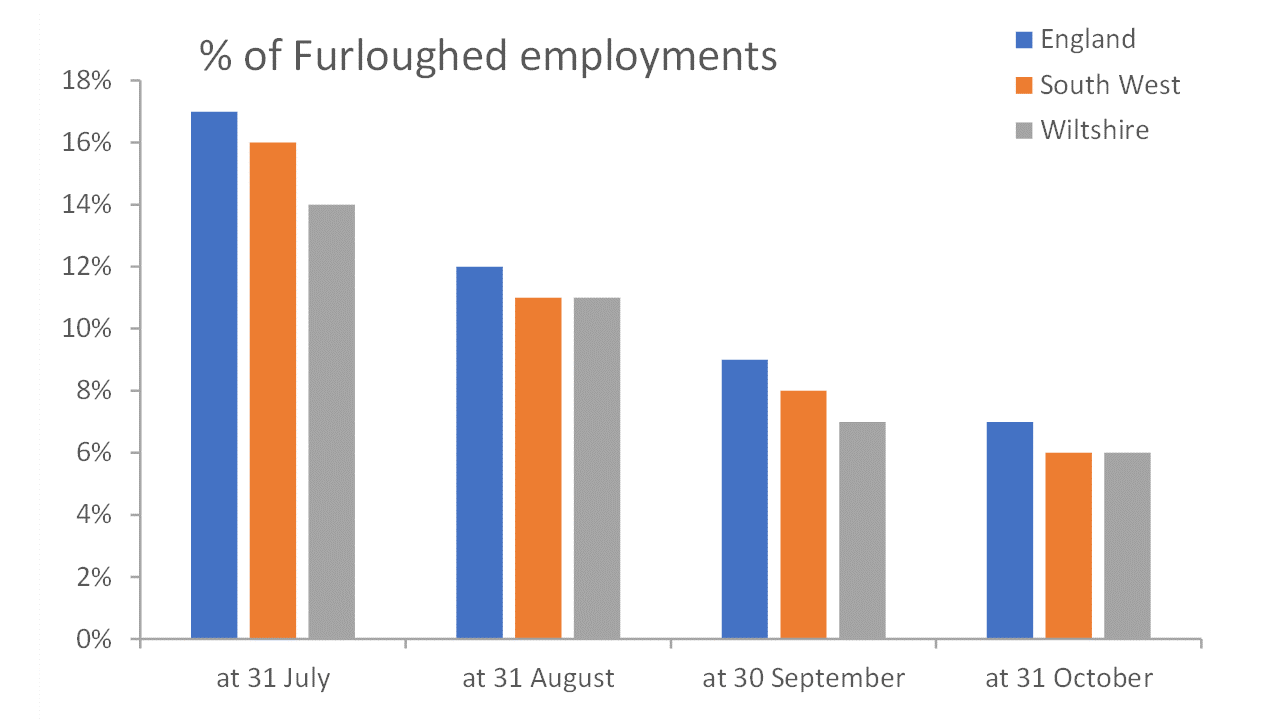 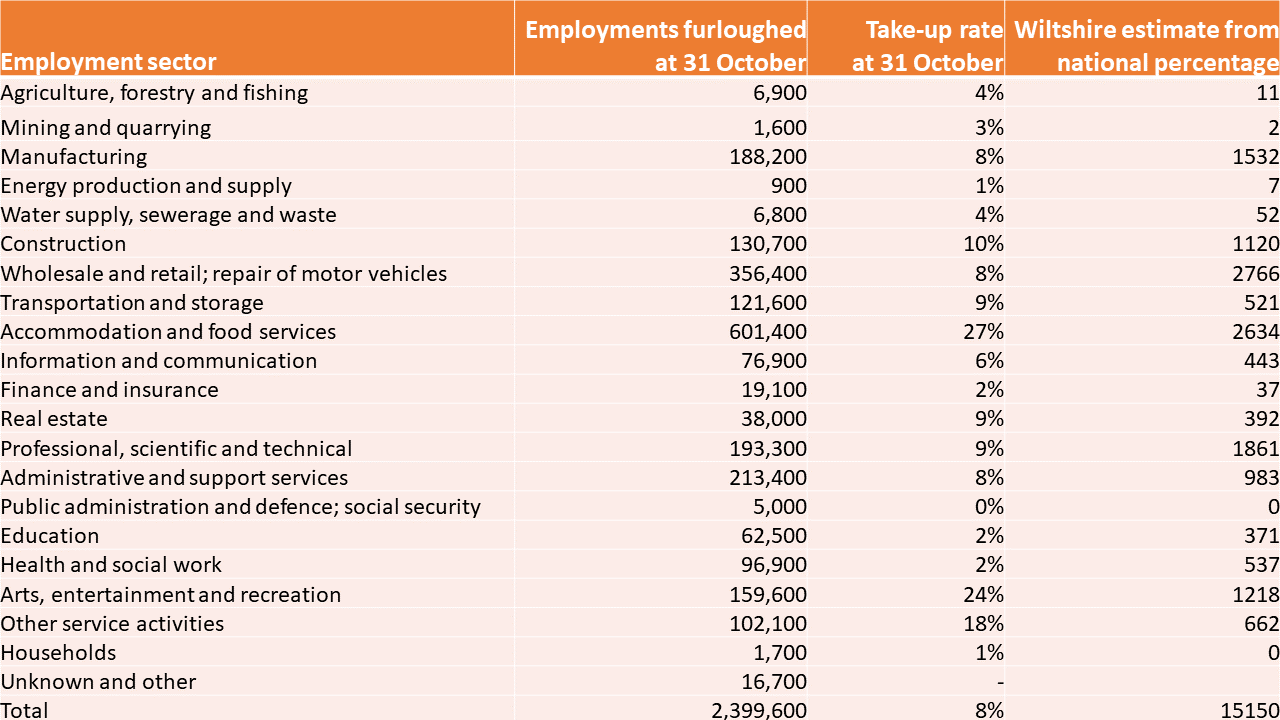 The take up percentage of furlough is higher in the younger age ranges and has reduced overtime for all age groups. 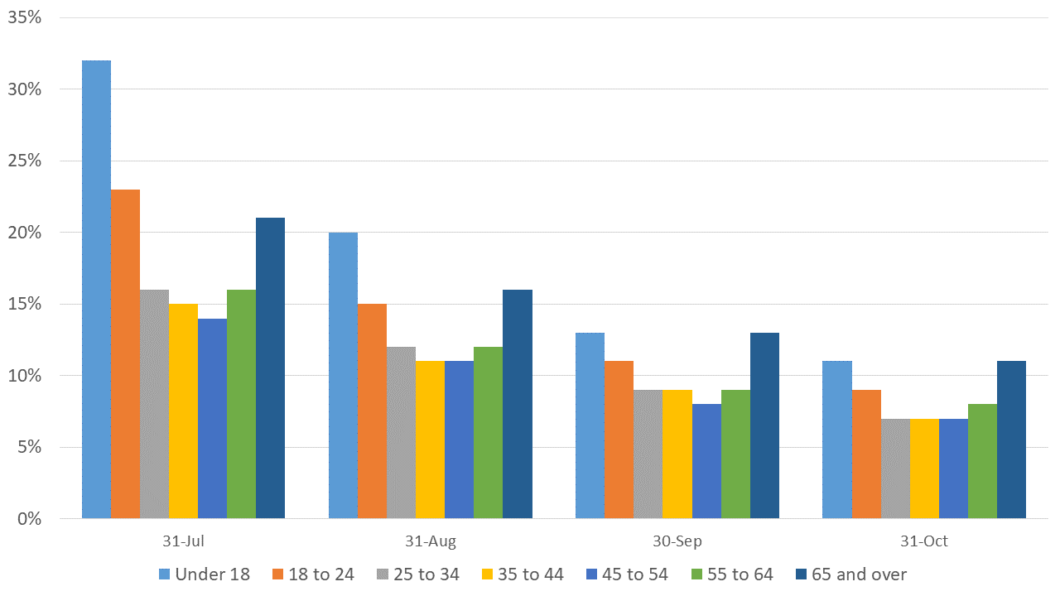 Since the 31st of July a higher take-up of the furlough scheme has occurred in female employments than male employments. This can be seen across England, South West and Wiltshire. 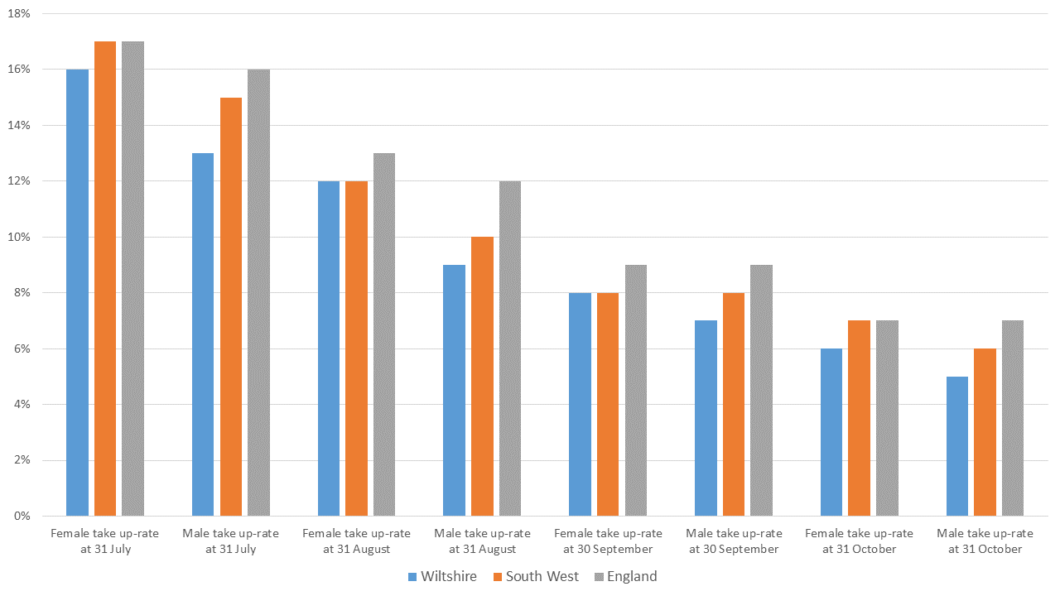 The Alternative Claimant Count statistics measure the number of people claiming unemployment related benefits by modelling what the count would have been if Universal Credit had been in place since 2013.

All age population on unemployment-related benefits

The percentage on the alternative claimant count has more than doubled in Wiltshire, the South West and the United Kingdom.

In Wiltshire the number of people claiming is around 12,000, compared to around 5,000 a year earlier.

The Wiltshire rate remains well below the UK average.  Both the UK and Wiltshire have seen the number of claimants more than double as a result of the impact of the pandemic and the response to it.

Around 12,000 people in Wiltshire are now claiming unemployment related benefits compared to around 5,000 a year earlier. 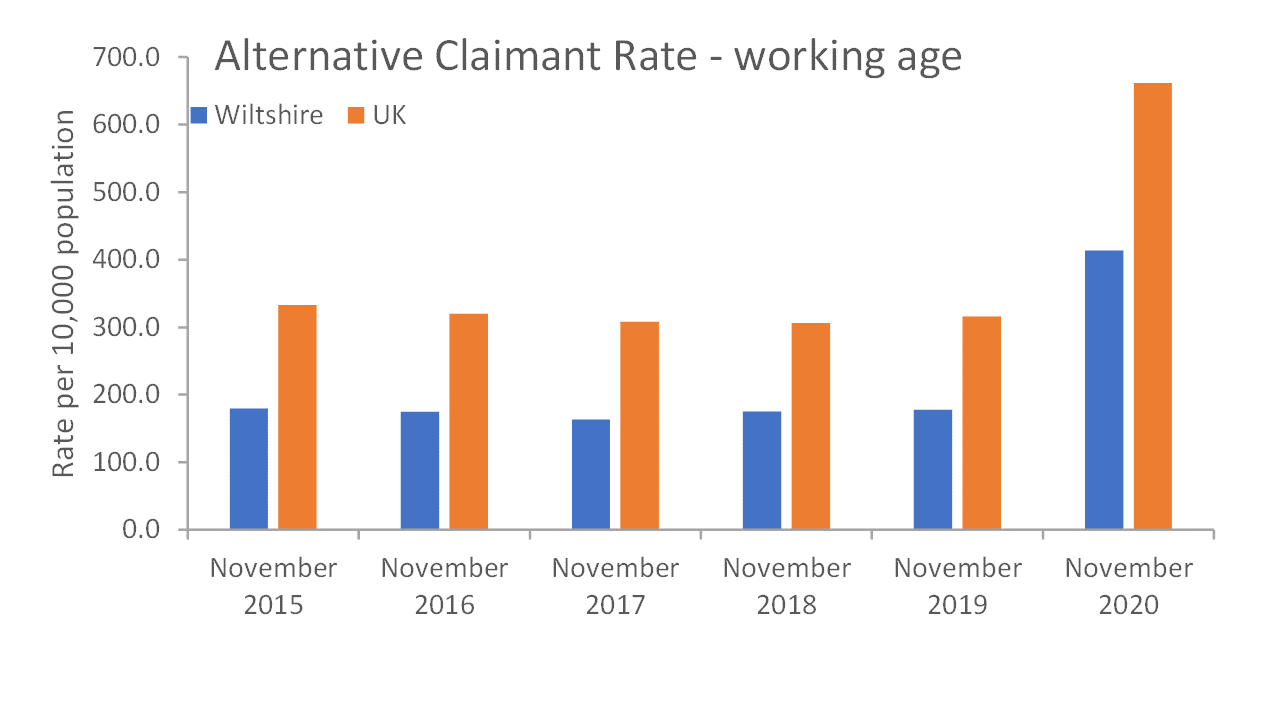 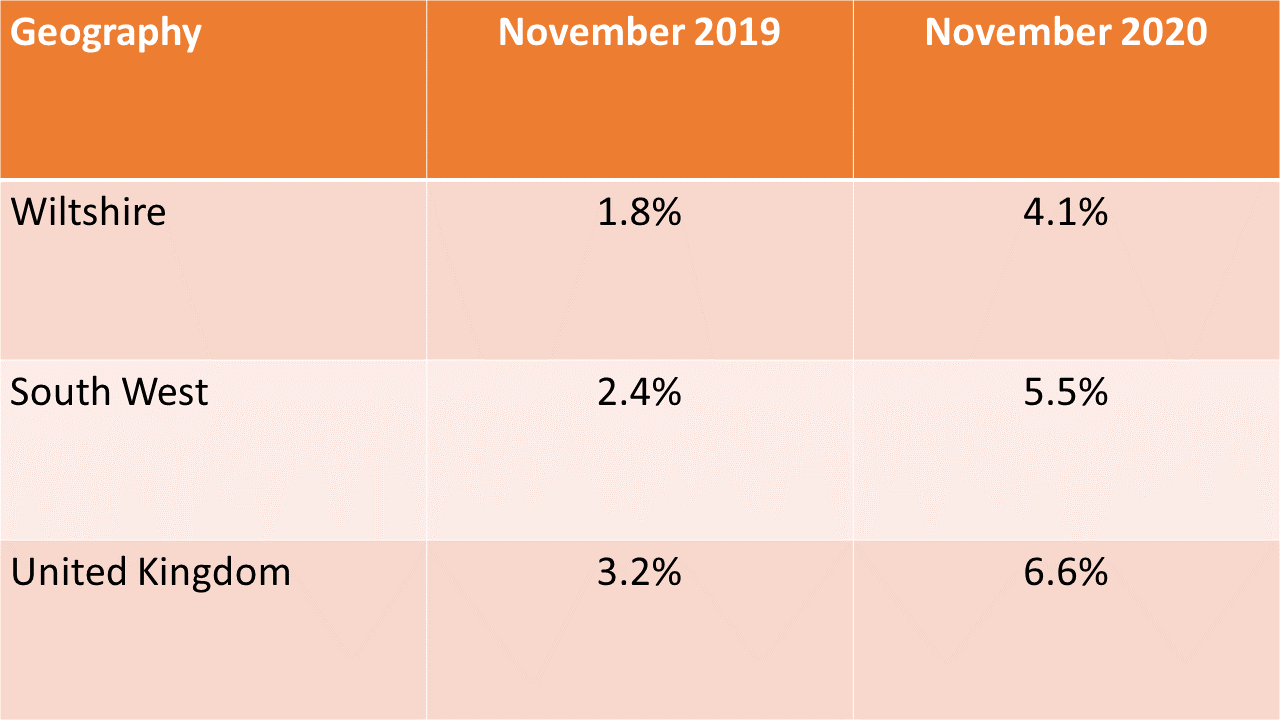 In Wiltshire this has more than doubled to around 2,300 people in November 2020 compared to around 850 a year earlier.

Kickstart apprenticeships have been developed to support this age group find or renter the workplace. 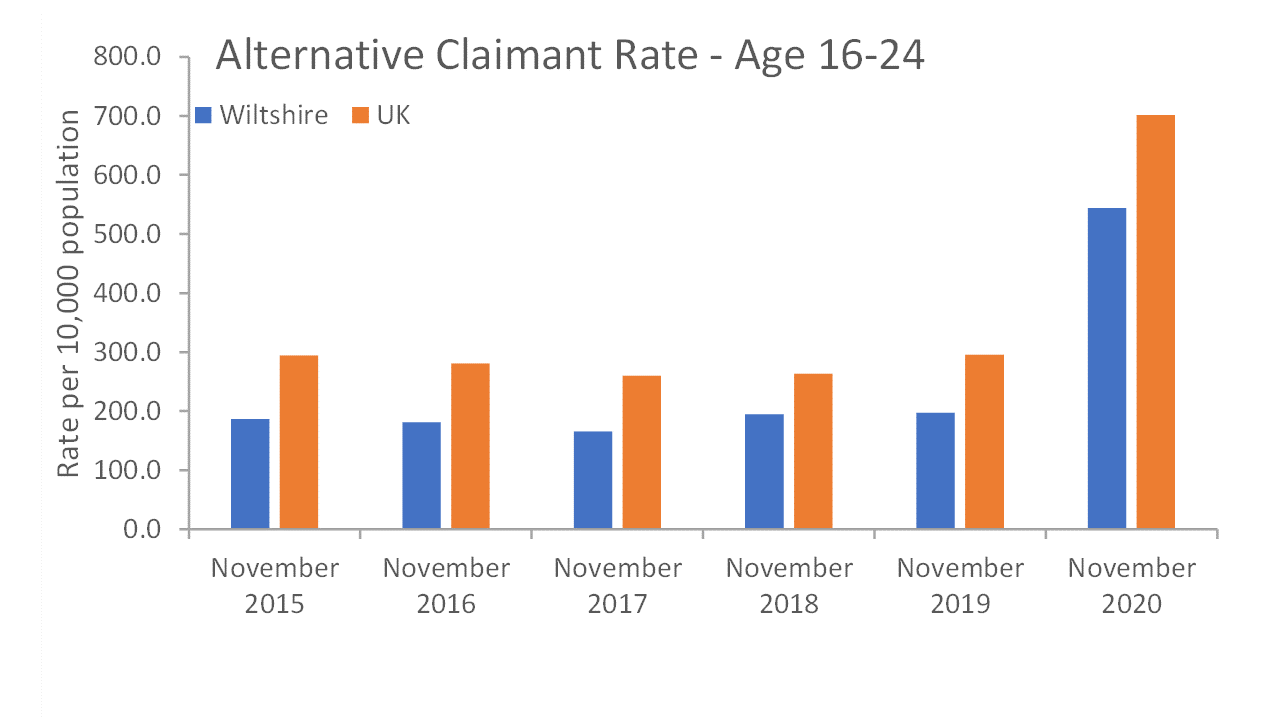 Calne has the highest rate in Nov’20 with the claimant count more than doubling. Trowbridge (1,341) has the highest number of claims followed by Salisbury (1,228) and Chippenham (1,161).

Wilton has seen the biggest rise in claimant count more than triple in the last year, while Malmesbury and Tisbury have seen claims almost triple.

Melksham and Bradford on Avon have seem the claimant increase from around to the Wiltshire average to being above the average. 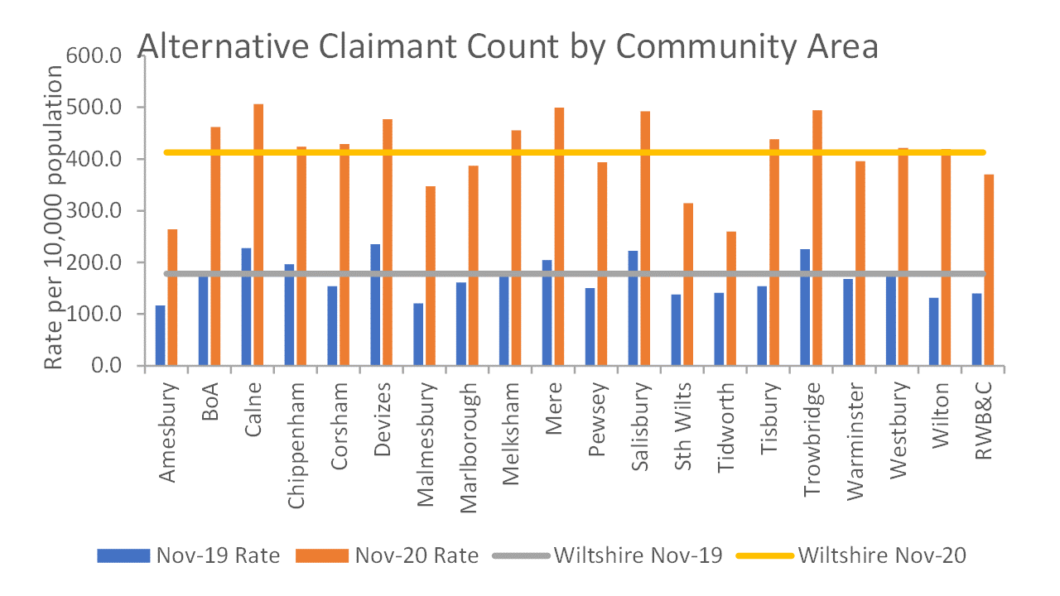 The council tax reduction (CTR) scheme can provide help with council tax costs. The amount of reduction will depend on circumstances, including income, savings, members of the household and council tax band.

As part of its response to COVID-19, the Government announced in the Budget on 11 March that it would provide local authorities in England with £500m of new grant funding to support economically vulnerable people and households in their local area. The expectation is that the majority of the hardship fund will be used to provide council tax relief, alongside existing local council tax support schemes. This funding is distinct from the £5bn COVID-19 response fund to support public services.

The Government’s strong expectation is that billing authorities will provide all recipients of working age local council tax support (‘LCTS’) during the financial year 2020-21 with a further reduction in their annual council tax bill of £150, using their discretionary powers to reduce the liability of council tax payers outside of their formal LCTS scheme design. 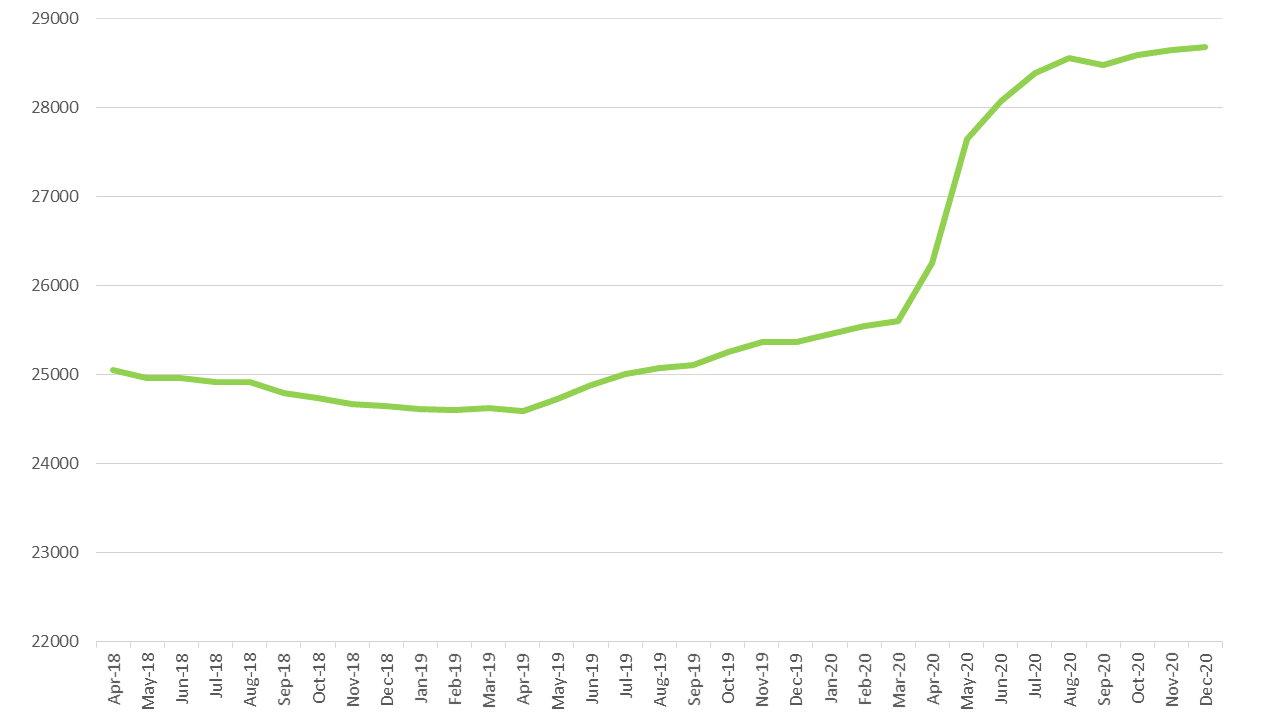 The 2011 census reported that 46,425 households in Wiltshire included someone with a long term health problem or disability.

The 2011 Census (of England and Wales) reported that in Wiltshire:

As of February 2020, 7,170 people were registered as entitled to carers allowance in Wiltshire. The entitled carers figure was a little over 7,000 in 2019. The figures for the time period during the pandemic will not be out for a few months.  Entitled cases show both the number of people in receipt of an allowance and those with entitlement where the payment has been suspended, for example if they are in hospital.

In An Unequal Crisis (August 2020), Citizen’s Advice reports that nationally

Young people who have responsibilities as a carer (young carers) are reported to be twice as likely to be NEET for six months or more.  Commons Library Briefing 24 August 2018.

An apprenticeship is a real job where the apprentice learns and gains experience whilst being paid. The apprentice will be a normal employee with a contract of employment and annual leave. By the end of the apprenticeship, they will receive a qualification to prove they're qualified in their chosen field.

It can take between one and six years to complete an apprenticeship depending on the industry and qualification. Apprenticeships are funded from contributions made by the government and the employer.

A common misconception is that apprenticeships are for people without many qualifications, but this is simply not the case. Anyone who meets the below criteria can start an apprenticeship, whether they have just completed their GCSEs or if they have a master’s degree.

Since 2011, the average number of apprenticeship starts in Wiltshire has averaged just over 5,500. 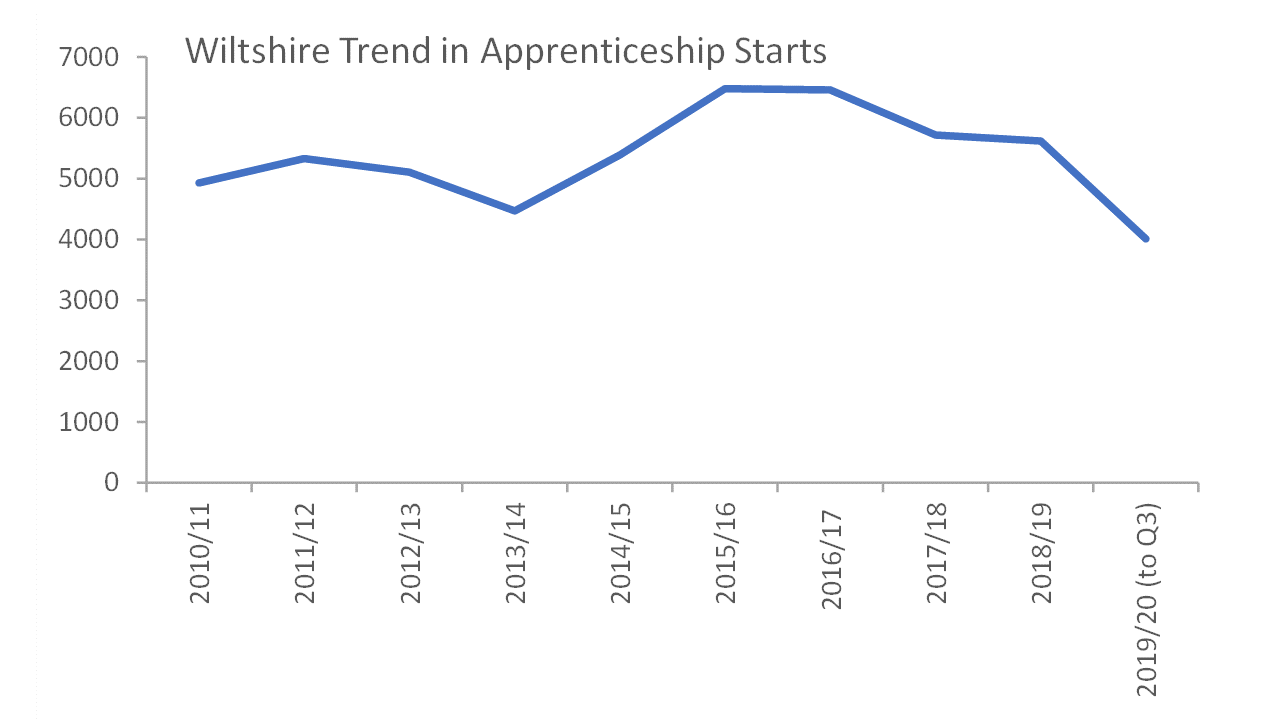 Starts during the last few quarters (May-October 2020) have dramatically decreased. Pre pandemic starts were around 1,500 per quarter, but are now down to 1,000. 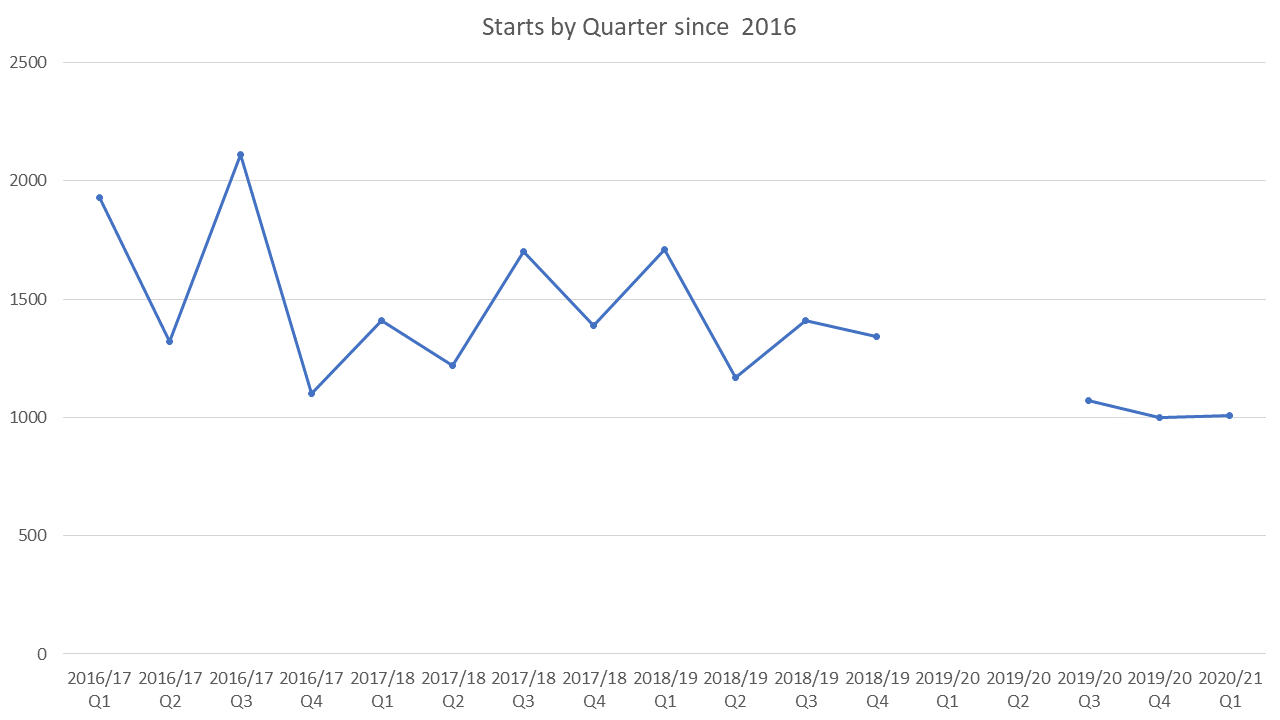 As has been found elsewhere during the pandemic, youth employment has been particularly hit and this is the case for apprenticeships as well. However, the higher skill level apprenticeship starts have continued to see an increase. 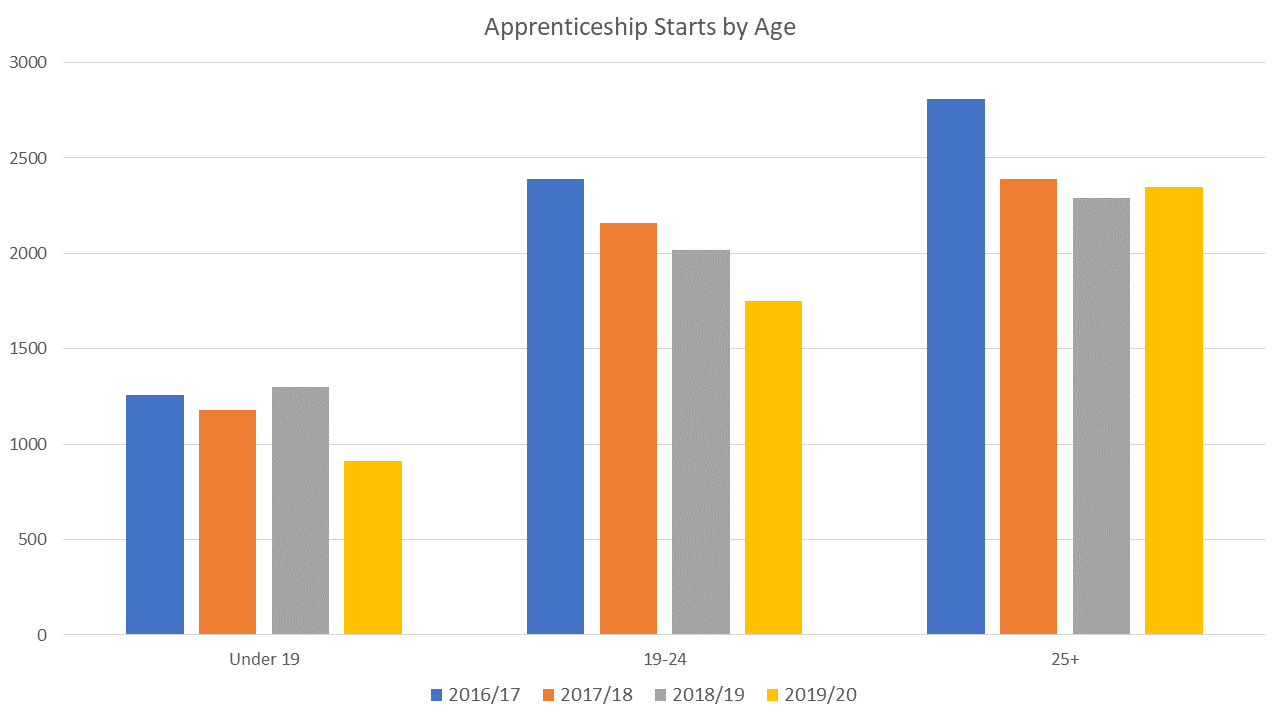 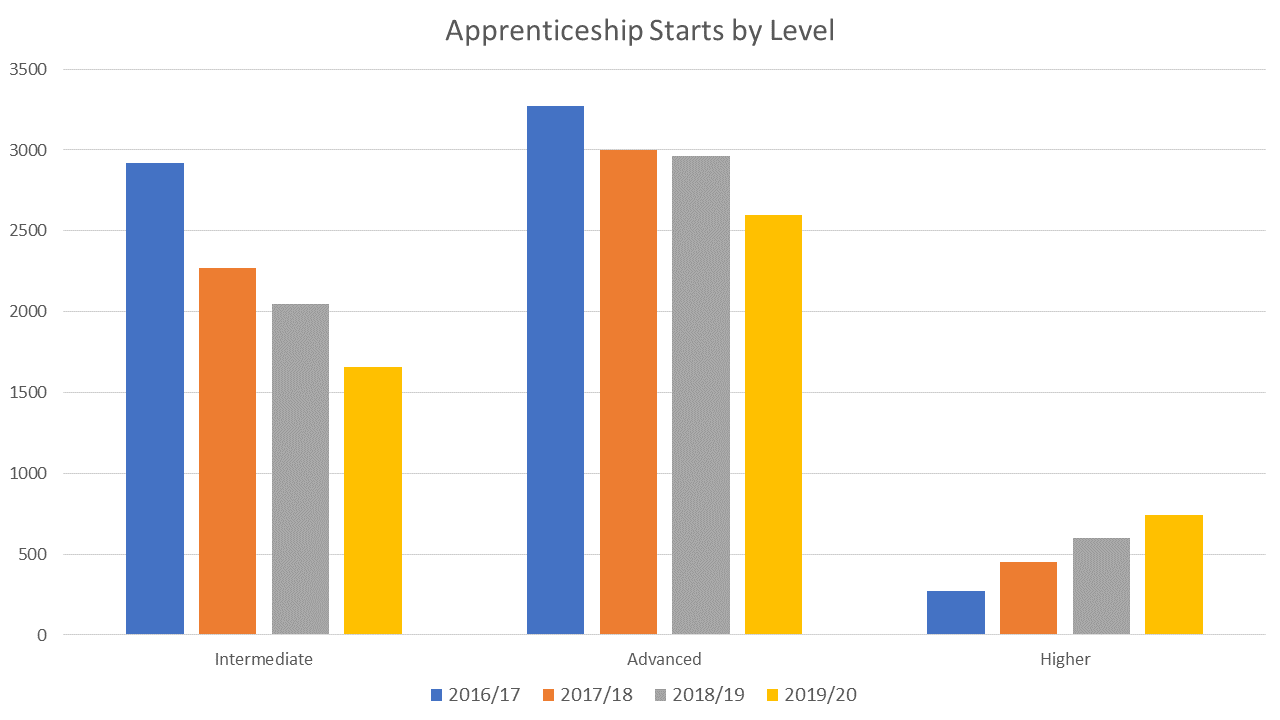 In the most recent quarter (August – October 2020) for apprenticeship starts, older age groups continue to be less impacted than the younger age groups.

And though apprenticeship starts overall remain lower than previous years, plateauing at approximately 1000 per quarter since the first lockdown, organisations that are starting apprentices are getting them to start higher qualifications, likely upskilling there current workforce. 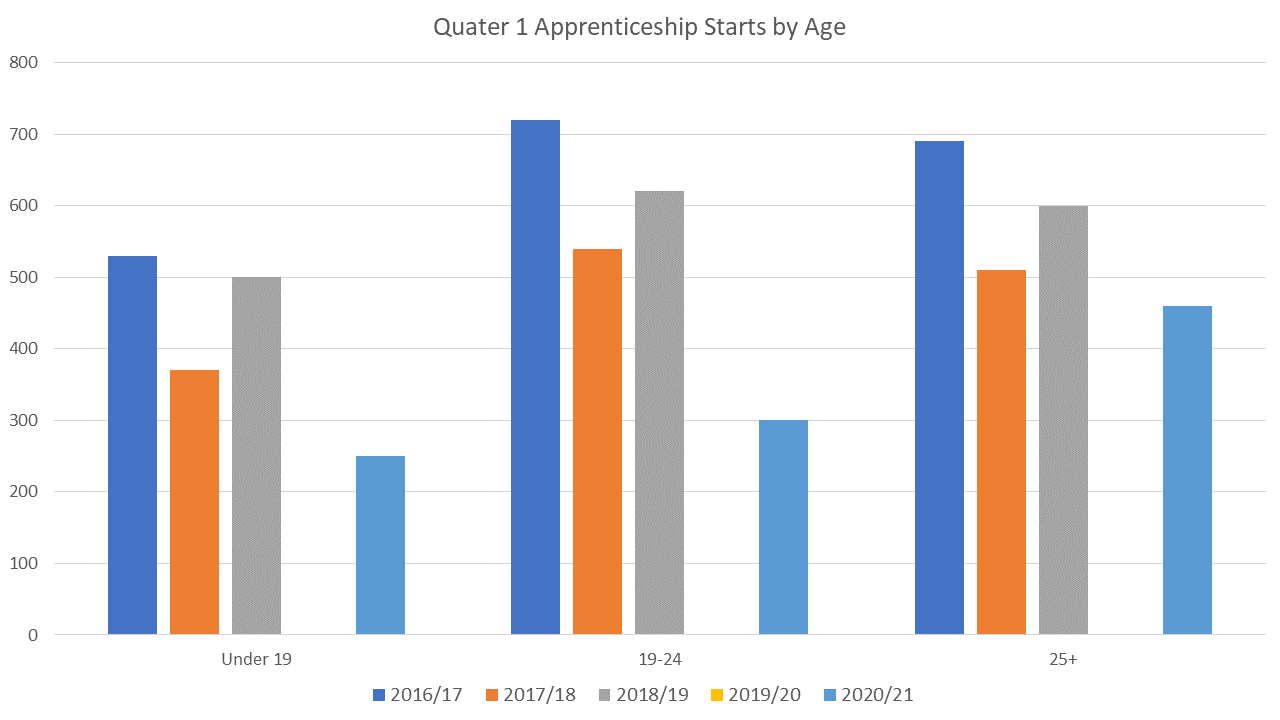 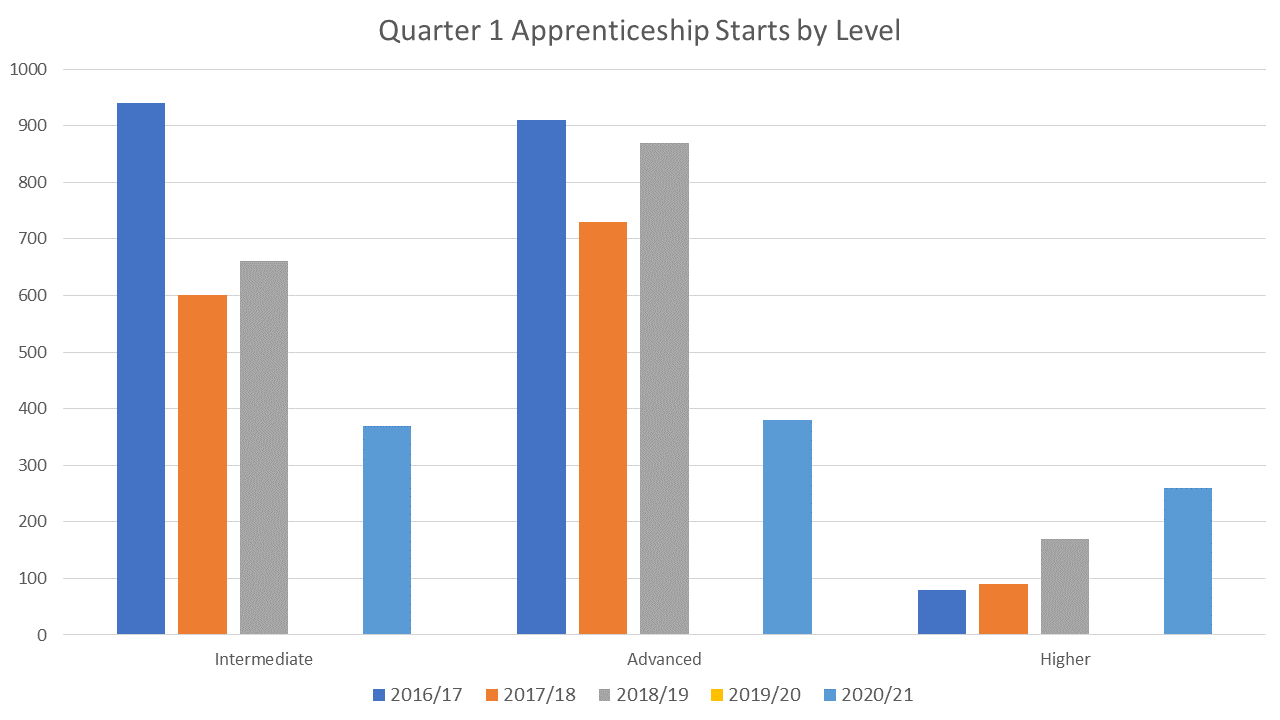 Though vacancy posting numbers can be sporadic, the numbers of unique vacancies being posted on the government portal each month has continued to recover and close to the amount seen in previous numbers, with only a slight decrease in September to October 2020 when the UK entered into its second and third lockdown periods, but these affected vacancy postings less severely than seen in April 2020 when the UK entered its first lockdown.

During the third lockdown the Government extended its employer incentives scheme from 31st January 2021 to 30th September 2021. Its incentives are currently: if an organisation hires an apprentice between 1st August 2020 and 30th of September 2021 they can receive up to £3,000 as part of the Government's plan to support employers during the economic recovery. If they hire a new apprentice aged 16-24 you will receive an incentive payment of £2,000. For apprentices aged 25+ they will receive £1500 (when using the apprenticeship service).  This is in addition to existing funding of £1000 for employers that hire an apprentice aged 16-18 or an apprentice aged 19-24 who has previously been in care or who has a Local Authority Education, Health and Care plan. 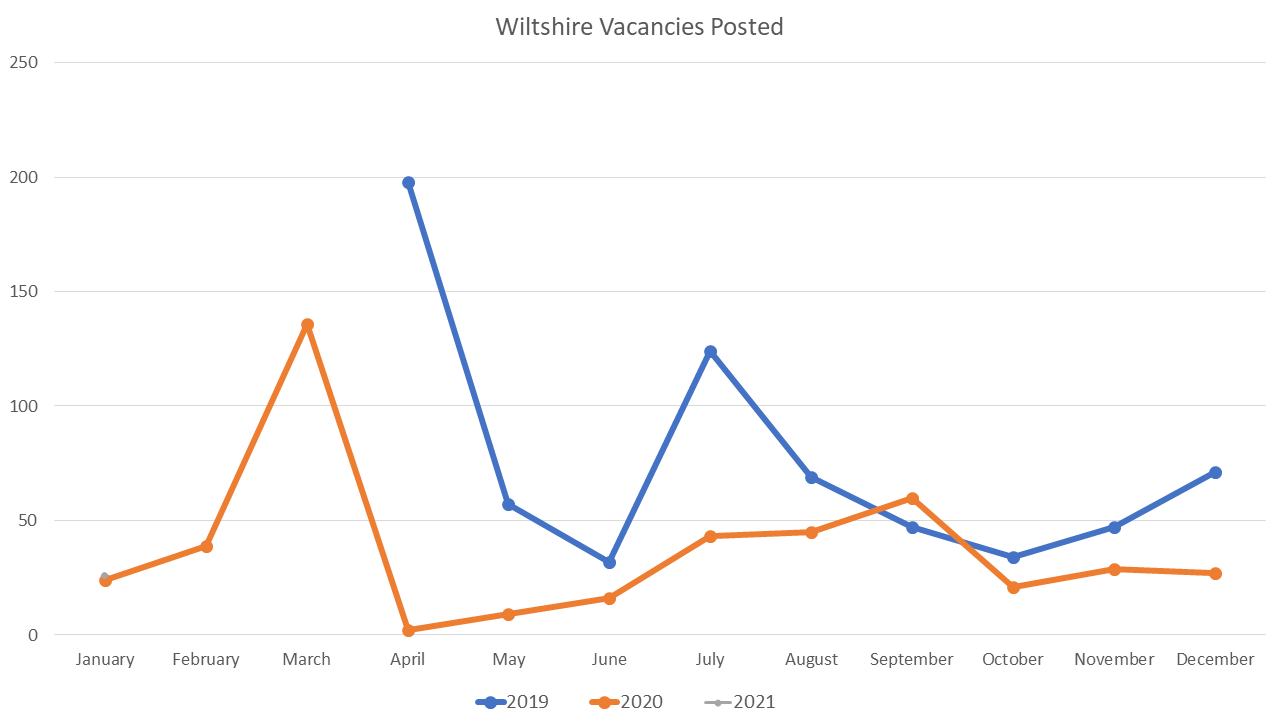 The estimated personal loan amount for community areas in Wiltshire at Q2 of 2019 is provided on the next slide.

The Personal loan dataset has a significant data lag and is unlikely to show the impact of the pandemic for another 6 months. However, it does provide an understanding of areas that were possible containing more debt than others. 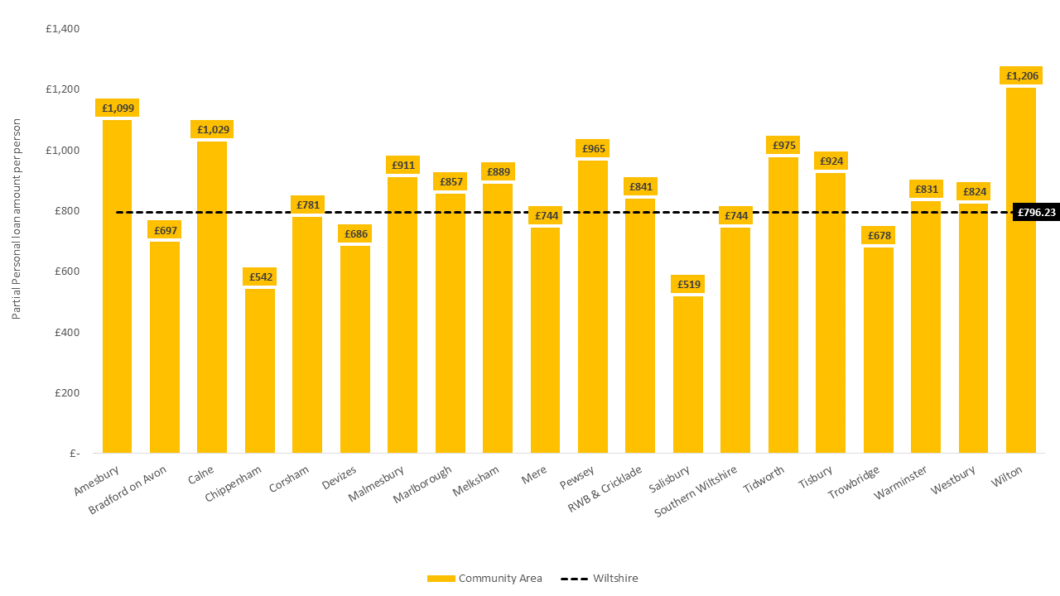 HM Treasury publish Forecasts for the UK economy monthly. These represent a comparison of independent forecasts.

This is a summary of published material reflecting the views of the forecasting   organisations themselves and does not in any way provide new information on the   Treasury’s own views. It contains only a selection of forecasters, which is subject to   review. No significance should be attached to the inclusion or exclusion of any   particular forecasting organisation. HM Treasury accepts no responsibility for the   accuracy of material published in this comparison.